Petronax is considered to be the second founder of the Monastery Abbey of Monte Cassino, initially established by St. Benedict of Nursia.

A native of Brescia, Petronax was encouraged by Pope St. Gregory II to make a pilgrimage to the tomb of St. Benedict in the year 717. There, among the ruins of the old monastery destroyed by the Lombards in 581, he found a few hermits. These solitaries elected Petronax superior, and other disciples soon gathered. 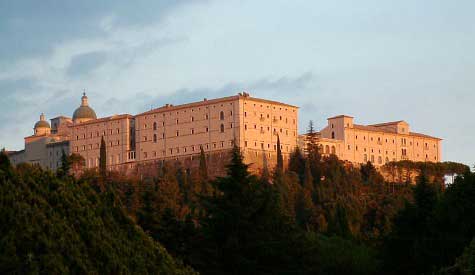 With the help of prominent nobles, especially the Duke of Benevento, and with strong backing from three popes, Petronax rebuilt Monte Cassino. Under the new abbot’s lengthy and energetic rule the community thrived once again, regaining its old eminence. Saints, and prominent men of all kinds, sought the hospitality of the great Benedictine abbey.

Petronax led the community until his death about the year 747.
Photo by: Halibutt
Posted by America Needs Fatima at 3:15 PM