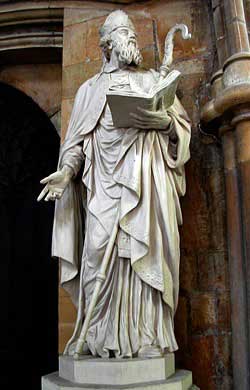 John was born in Harpham, a village in Yorkshire. As a young man he joined the famous school of St. Theodore in Kent, where he distinguished himself. Later, he joined the Abbey of Whitby in his own country, where his exceptional abilities marked him out for preferment, and when the diocesan see of Hexham became vacant, he was appointed its bishop.

A great contemplative, he often retired to a cell by the Church of St. Michael beyond the River Tyne whenever his duties allowed.

At the death of St. Bosa, John was appointed his successor as the Bishop of York. As such he ordained the Venerable Bede who wrote of him at length in his Ecclesiastical History, testifying to the bishop's sanctity and recording eye-witness accounts of his numerous miracles. As Bishop of York, John continued his accustomed habit of retiring periodically to the Abbey of Beverley, a monastery he had built around the year 700.

Worn by age and fatigue, John resigned his bishopric to his chaplain, St. Wilfrid the Younger, and retired to Beverley where he spent the last four years of his life. He died on May 7, 721.
Posted by America Needs Fatima at 1:00 AM