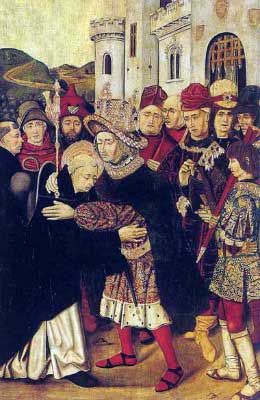 Dominic was born at Canas de Navarre, on the Spanish side of the Pyrenees. From a family of peasants, at first he looked after his father’s flocks in the foothills of the beautiful mountains of that region.

Developing a taste for silence and solitude, he entered the monastery of San Millán de la Cogolla. As he made great progress in the religious state, he was entrusted with works of reform and became prior of his monastery.

Refusing to hand over to King Garcia III of Navarre some of the monastery’s lands which the monarch coveted, he and two of his companions were forced into exile by the king. They were warmly received by Ferdinand I of Castille and León who entrusted to Dominic the monastery of San Sebastián de Silos, in a remote part of the diocese of Burgos. The ancient Benedictine monastery, however, was decaying – structurally and spiritually.

As Abbot of San Sebastian, Dominic restored order to both the physical structure of the edifice and the spiritual edifice of the souls within, and made Silos famous throughout Spain.

Dominic was a great miracle worker, and it was said that there was no disease that he had not, at one time or another, cured. His charitable solicitude embraced not only the poor and the infirm but Christians enslaved by the Moors. These he endeavored by all means within his powers to free from their cruel captivity.

About one hundred year after his death, a young woman, Blessed Juana de Aza de Guzmán, made a pilgrimage to his tomb, asking to conceive a child. The child she effectually conceived and bore, she named Dominic after the holy abbot of Silos. This Dominic became the great St. Dominic de Guzmán, founder of the Dominican Order.