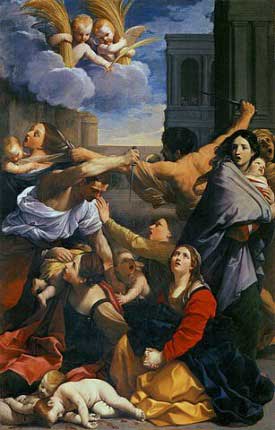 When the Magi arrived in Judea seeking the newborn “king of the Jews” (Matt. 2:1-2), King Herod was worried. After ascertaining in Scriptures that Bethlehem was the likely birthplace of the Child, he met with the Wise Men. The crafty king bid them go to Bethlehem and bring him back details so he could also adore the new king.

But God Who sees into the hearts of men, warned the three Magi in a dream not to return by way of King Herod. Far from wishing to adore Christ Jesus, the tetrarch wished to destroy Him.

Realizing that he had been found out, Herod raged and ordered all little boys, two years of age and under, to be slaughtered in Bethlehem and its surroundings, hoping thus, to also destroy the Child Jesus.

But warned in time by an angel, St. Joseph had gathered the mother and child and fled to Egypt. Thus was fulfilled the prophecy of the Prophet Jeremiah: “A voice in Rama was heard, lamentation and great mourning, Rachel bewailing her children, and would not be comforted, because they are not.” (Matt.2:17-18). 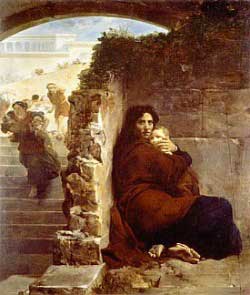 The Church considers those slaughtered babes, the first martyrs, since they shed their blood because of Christ. The Church officially honors their martyrdom on December 28. Several churches in Rome and throughout Europe claim to hou
Posted by America Needs Fatima at 9:30 AM