The Holy Family in Egypt

A mysterious star had appeared, shepherds spoke of an angel in the night, and of a royal babe in a manger, kings from the East had come, and gone, and now Holy Simeon and Anna rejoiced at having seen the promised of the Lord, and God’s salvation.
On his throne, King Herod seethed with envy, and squirmed with anxiety lest a Child take his crown. And his evil mind conceived one of the most heinous crimes in history, the murder of all male children ages two and under, just so he could be sure one Child died. 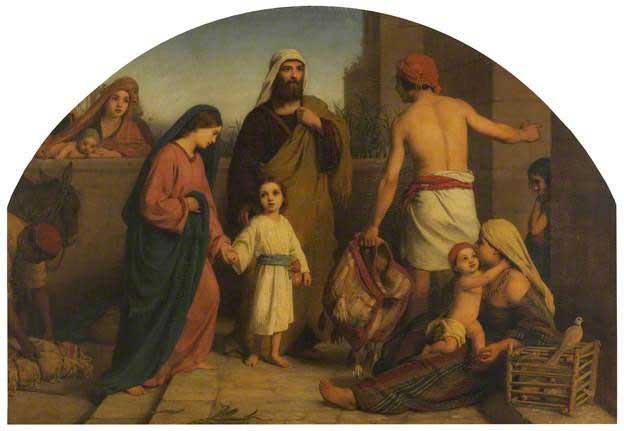 Warned by an angel, the young family left in the dead of night. Once more Saint Joseph led the donkey that had brought Blessed Mary to Bethlehem. But now, the happy beast carried the Creator of the Universe as well.
Into 180 miles of wilderness went Joseph, Mary and Baby Jesus to face frightful perils and hazards. And it was the time of year when the desert is frigid by night. At times, all the Holy Family had in the way of shelter was the side of a hill, with Joseph’s cloak propped on his staff for a bit of respite against the cold.

Click here for your free Meditation Booklet
The holy travelers also suffered hunger. One day, having run out of their meager provisions, they had nothing to eat all day.  And God allowed the weather to try them further, so that the wind and rain picked up in fury. And though Mary held the Child close, little Jesus felt the inclemency of the weather and shed tears and shivered like any baby would. And He also already offered His Father all these trials for our salvation.
Finally, after much suffering, the Virgin Mother lifted her heart in prayer, asking nothing for herself but for her God in the flesh. And using her power as queen of the universe, commanded the elements to no longer afflict their Creator. And, immediately the storm abated.
In return, the Child God rejoiced at His mother’s solicitude, and ordered the angels to shelter them from the weather. The angels immediately built a resplendent dome over the travelers, so that now they travelled as if in the plushest RV.
The angels also brought them delicious bread, sweet fruit and a fortifying drink, so that they were amply consoled for all their suffering and labor.
And so, the Holy Family came into Egypt. And then another marvel happened.
The Egyptians were much given to idolatry, and superstitions, and built temples and statues to idols in which demons took up residence. As the holy threesome travelled through the towns of Egypt, the Infant God raised his eyes and small hands to His Heavenly Father, and begged Him for the salvation of the inhabitants held captive by Satan.
Immediately making use of His sovereign power, He drove the demons from the idols and temples, hurling them into the infernal abyss. To which the idols and temples, one after another crashed to the ground leaving the air lighter and the atmosphere freer. The people of Egypt were astounded, though they ignored the source of these blessings.
One demon dwelt in a great tree, which the people worshipped. Once this demon was ousted, the tree, as if in deep gratitude, bowed to the ground before the Holy Family.
And so Jesus, Mary and Joseph took up their abode near the city of Heliopolis, today in the North/East of Cairo, and there did much good for several years until the Angel again appeared and told them it was safe to return home.
(Based on the private revelations of Venerable Maria of Agreda)
Posted by America Needs Fatima at 9:44 AM