Gregory was born in Rome about the year 540. His family was wealthy, distinguished and known for their piety. He was well educated and began a career in public office, becoming prefect of the city and one of the richest men in Rome by the time he was thirty.

Though he held the highest civil office, Gregory decided to give up his career, money and possessions to dedicate himself to God. He became a monk and was ordained a priest at the monastery of St. Andrew, later becoming one of the pope’s seven deacons of the Roman Church. He acted as a papal ambassador in the East for six years, and on his return to Rome, was made Abbot of St. Andrews. 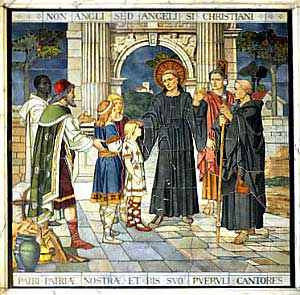 In 590 Pope Pelagius died of a plague that had swept through Rome. Gregory was unanimously elected pope in the same year, but continued to live with monastic simplicity. As pope, Gregory sought peace with the invading Lombards. For nine years he strived for a settlement between the Byzantine Emperor and king of the Lombards, Agilulf, but was eventually forced to negotiate a separate treaty for the safety of Rome and the surrounding districts.

A generous and kind man, Gregory strove to ease the sufferings of the poor, feeding them on a regular basis. He converted many Jews in Rome using an uncommon method: instead of coercion, he declared that they were to be converted by meekness and charity and did not allow them to be oppressed or deprived of their synagogue. Using the same method, he converted many in England.

Gregory died in 604 at the age of 64. He humbly called himself “servus servorum Dei,” Servant of the servants of God. He is the first pope given the title of “great.”
Posted by America Needs Fatima at 9:29 AM