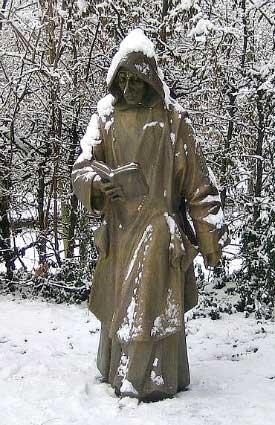 From time to time throughout History, God reminds His creatures, in very vivid ways, of "the four last things” – Death, Judgment, Heaven or Hell. In his History of the English Church, St. Bede the Venerable records one such occasion as it was told by an Irish monk named Haemgisl.

A wealthy man and a native of Northumbria in England, Drithelm was married and the head of a devout family. No particulars of his early life, other than these few, are known of him prior to the extraordinary event which changed the course of his life forever. In the year 693, Drithelm fell suddenly and gravely ill, died, viewed the afterlife, and was then permitted to return to life in order to tell others of his vivid experience.

The morning after his death, as his grieving family was gathered around his bier, Drithelm sat up. Frightened at the sight of the dead man come back to life, everyone but his wife ran away, terrified. “Be not afraid,” he said to her, “for now I am truly risen from death and allowed again to live among men... But,” he added, “hereafter I am not to live as I have been wont, but rather in a very different manner.”

Drithelm immediately left his house and went to church, where he spent many hours in prayer. Returning home the next morning, he divided up all his possessions among his wife, his children and the poor. He then gave a detailed account of his experience to King Aldfrith of Northumbria, Aethelwood Bishop of Lindisfarne and the Irish monk. At the sovereign’s request, the Abbot of Melrose Abbey admitted Drithelm into the monastery as a monk.

Drithelm spent the rest of his life in a hermitage on the banks of the River Tweed. His remaining years were indeed lived “in a different manner” as he gave himself over to constant prayer and mortification, often combining the two by standing in the freezing waters of the river, surrounded by floating ice, while reciting the psalms. To those who would comment on his extraordinary means of penance by such remarks as, “It is wonderful, Brother Drithelm, that you can stand such cold,” the monk would reply gravely, “I have seen greater cold.” To those that heeded, he would warn them to have a wholesome and holy fear of their lot in eternity, and to those who would stop awhile and listen, he would recount his vision, thereby influencing many for the good by his words and example.

What had changed Drithelm's whole way of life was an astounding vision of eternity that he had experienced while he was "dead."

After dying, Drithelm said he had found himself in the presence of a “handsome man in a shining robe.” This guide showed him three panoramas. The first was a long valley with a road running through it. One side was being consumed by a great fire, on the other blew a blizzard of freezing snow and hail. On both sides could be seen countless souls who would cast themselves from the fiery flames to cool off in the icy blizzard, and then throw themselves out from the blizzard to warm up in the fire. Drithelm thought this must be Hell, but his guide told him it was not.

They next came to a place of intense darkness. Here the guide withdrew and left him for awhile. Soon Drithelm saw a deep pit. Out of this pit, tongues of flame would throw up souls like sparks and then swallow them up again. Among those souls he saw a clergyman, a layman, and a woman. The stench of the pit was unbearable. As he stood looking, a crowd of devils surrounded him menacingly, but when his heavenly guide returned, they all fled.

The third vision was of a pleasant meadow full of sweet-scented flowers and happy people. “This is not the Kingdom of Heaven,” his guide informed him. When they went towards the kingdom and could sense from afar its light and sweetness, the guide would not let him go any farther. He then explained to Drithelm that the first valley was filled with people who had been saved only at the moment of death. They had much purification to endure, but the prayers and Masses offered for them on earth could shorten their suffering. The pleasant meadow was for those whose need for purification was slight. Those who died without imperfection, he said, would enter Heaven at once. But those who entered the dark hole of Hell could never escape.

His heavenly guide then told Drithelm that he must return to life, but should live thereafter “in a different manner.”
Photo by: Unterrather
Posted by America Needs Fatima at 10:15 AM