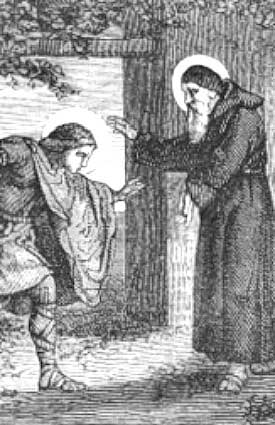 After the death of the Frankish king in 511, his realm was divided among his four sons. Born in 524, Clodoald was the youngest son of Clodomire, second son of the king. When Clodomire died in battle, leaving his section of the kingdom to his own three sons, the princes were sent to Paris to live with their grandmother, St. Clotilda.

Until Clodoald and his brothers were of age, their portion of the kingdom was supervised by their uncle, Childbert. However, he was greedy and wanted the kingdom for himself, and he decided to have his nephews killed.

His two brothers, Theodoald and Gunther, were murdered, but Clodoald escaped to a monastery in Provence. In due course, the prince placed himself under the discipline of St. Severinus and lived as a hermit, never attempting to reclaim his kingdom. Instead, until his death in 560, Clodoald relentlessly evangelized the people of Nogent in which vicinity he had established a monastery.
Posted by America Needs Fatima at 11:09 AM