Holding Hands with The “Gate of Heaven”


Of all the invocations to our Lady, Gate of Heaven is one of the most beautiful. This title gained a new meaning for me when I arrived for a Fatima home visit at the house of Dominique McGuire and found her in tears. Her mother, Marie Jeannine Michel, a native from Haiti, had suffered a massive heart attack the day before and was now dying. 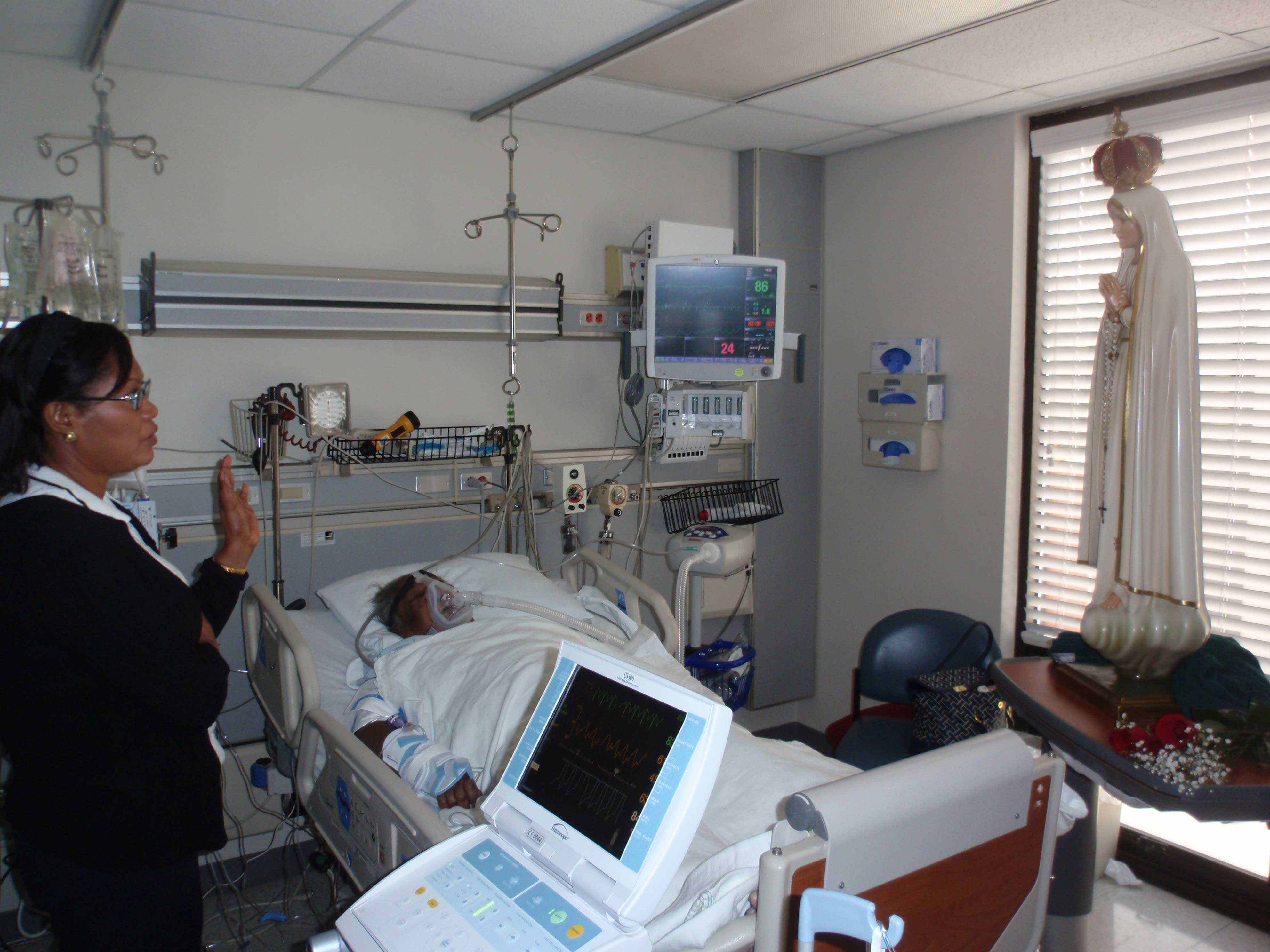 I was more than happy to take the statue to visit her at Rex Hospital in Raleigh, North Carolina. It was painfully clear, when we arrived in the Intensive Care Unit, that this poor soul was reaching the end.
Over the next couple of hours we prayed numerous rosaries, litanies and the prayers for the dying by her bedside. We also struggled to provide the dying women with all the spiritual assistance we could.
As we prayed, the attending nurse, who happened to be Catholic, kept calling local Churches to find a priest who would administer last rites. Whenever she entered the room to care for Mrs. Michel she would join in the responses to the Hail Mary. Overwhelmed by the scene, she exclaimed, “I hope when I am dying someone will bring the statue to visit me and pray the rosary.”
Moments before the priest arrived, Dominique asked me if I had an extra scapular for her mother. I did not. As the priest administered the last rites I scurried from the room in search of this precious sacramental, only to find I was the only person wearing one. Mrs. Michel was in much more need of it than me, so with the help of a doctor we temporarily removed her oxygen mask and placed my scapular around the dying woman’s neck. Dominique then took her Miraculous Medal and pinned it on to the scapular.
The most moving part of this visit occurred when Mrs. Michel opened her eyes and showed signs she wanted to speak. When they removed the oxygen mask, Dominique told her mother, in their native tongue, that “Momma Mary” was in the room.
Since Mrs. Michel seemed to be already looking into eternity, with a type of “fog of death” in her gaze, I carried the statue over next to her bed. Surprisingly she reached up and took hold of our Lady’s hands and held on for some moments. The oxygen mask was then replaced as the nurse administered morphine to deaden the pain she was experiencing.
Mrs. Michel died at 6:00 AM the following morning with Dominique praying beside her bed.
While the America Needs Fatima home visitation program is a very rewarding apostolate, nothing on earth compares to the satisfaction of a visit like this. A person going through such a moving ordeal, however, could naturally ask, “Was there something more we could have done?”
In the case of Mrs. Michel, the answer is a resounding no. She received the last rites of Holy Mother Church, was clothed in the brown Scapular, and was almost continuously surrounded by the melodious sound of the Angelic Salutation.
Hours before she passed into eternity, Mrs. Michel also had the grace to hold hands with She who truly is the Gate of Heaven.
By: Norman Fulkerson

Order your free 8x10 picture of Our Lady of Fatima
Posted by America Needs Fatima at 10:33 AM