Scholastica, the twin sister of St. Benedict, consecrated her life to God when she was very young. After her brother established his monastery at Mount Cassino, she resided in the neighborhood at Plombariola, about five miles from where her brother lived. Scholastica founded a monastery of nuns that was governed by Benedict, though still under her own direction. 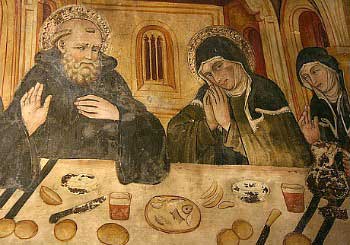 She visited her brother once a year, and as she was not allowed to enter his monastery, he went with a few of his brothers to meet her at a house some distance away to pray together and speak of spiritual matters. On one such occasion in 543, they had passed the time as usual in prayer and holy conversation and in the evening sat down to eat supper. Scholastica begged her brother to remain until the next day, deviating from their usual custom, so that they might continue their conversation. Benedict refused to spend the night outside his monastery as it was contrary to his order’s rule.

Scholastica turned to God in prayer, and a thunderstorm erupted. The rain and lightning was so violent, that Benedict and his companions were prevented from returning home. "May God forgive you, sister" said Benedict, "for what you have done." "I asked a favor of you," she replied simply, "and you refused it. I asked it of God, and He has granted it!" Thus, they spent the night speaking of holy things. In the morning, they parted ways, never to see one another on earth again: just three days later, Scholastica died.
Posted by America Needs Fatima at 6:38 PM