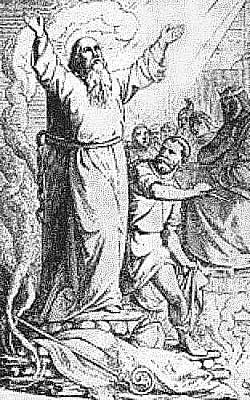 Polycarp, a holy man and bishop of Smyrna, was part of the group of early bishops. When heresy arose in Asia, violence toward Catholics arose with it, and Polycarp was persuaded by his friends to go into hiding.

Eventually Polycarp was found and arrested. When his persecutors arrived at his hideout, he went to them and served them a meal, asking for a short time to pray before being taken away. Polycarp was sent to trial, where his captors tempted him with freedom and tried to convince him to denounced Our Lord. “Fourscore and six years I have served Him and He hath done me no wrong,” he said, “how then can I blaspheme my King and my Savior?”

Soon after this, in the year 155, Polycarp was burnt at the stake – though there was no odor of burning flesh: instead a smell of incense was in the air. When the fire seemed to do him no harm, a spear was thrust into his side, killing him. A dove flew out of the wound, and Polycarp’s blood quenched the fire, causing part of his body to remain intact. However, his remains were later burned to ash because the heretics feared other Catholics would revere the body as a relic.
Posted by America Needs Fatima at 11:28 AM