Chinese Baby Cries Before Being Cremated 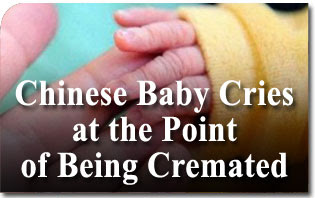 A Chinese boy was pronounced dead at a children's hospital in Anhui Province (eastern China) but began to cry when he was about to be cremated, local media reported according to AFP news agency.

Hospital sources told the official Xinhua news agency that the baby was less than a month old and seriously ill, and his parents had accepted the doctors’ proposal to euthanize him, taking the innocent’s life.

After the death certificate was signed, the baby was delivered to a funeral home, which did not carry out the cremation because the child began to cry.

The baby was immediately returned to the hospital. After the incident, a doctor there was suspended and a nurse was fired.
The episode clearly shows the inhumanity of anti-birth procedures in Communist China. But is it only in China?
The case could well have occurred in the West with or without a euthanasia law for children.

China is just a little ahead in the merciless race of the "culture of death,” which hates human existence.

Posted by Robert Ritchie at 2:08 PM