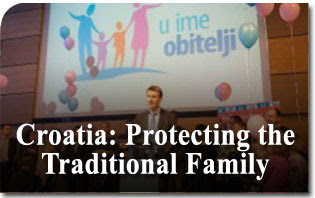 We can look to Catholic Croatia as an example for the West! This small Balkan country has registered a resounding NO to same-sex “marriage.” Its cry on behalf of natural and traditional family - father, mother and children – has echoed throughout the world. As a result of the referendum held on December 1, 2013, it now proclaims to the world that a family can be formed only by a man and a woman – what could be more natural?

Croatian President Ivo Josipovic and his Prime Minister Zoran Milanovic, both Socialists, had sought to get same-sex “marriage” approved. They were supported by left-wing parties, the homosexual lobby, and the liberal media, particularly state television –not to mention the strong pressure the European Parliament brought to bear for the same end.

On the opposite side, Catholic supporters of family values, in an unprecedented mobilization, gathered nearly six thousand volunteers in a coalition called "U Ime Obitelji" (In the Name of the Family) in order to collect signatures to force the government to hold a referendum consulting the Croatian people: “Do you favor the introduction into the Constitution of a clause defining marriage as the union between one man and one woman?”

For a referendum to be held, according to current law, 450,000 signatures (10% of the Croatian electorate) had to be collected. The result far exceeded expectations: 750,000 signatures! That is an outstanding result for a small country of 4.3 million inhabitants (88% of whom are Catholic). Thus, Parliament had to approve holding the referendum.

On the historic date of December 1, 2013, the population went to the polls. The end result: a vast majority of Croatians (65.8%) voted against same-sex "marriage" and supported the definition of family as consisting solely of the union between a man and a woman. Divine and natural law and sheer common sense prevailed!

Democracy without Popular Consultation?
Croatia, which became the 28th member of the European Union (EU) on July 1, 2013, has dealt a severe blow to the EU-promoted Cultural Revolution pressing nations to legalize same-sex "marriage" and adoption of children by same-sex couples.

Both the EU and the liberal media, which campaigned intensely against the referendum, have still not “swallowed” this family-friendly outcome.

It can well be imagined what would have happened had the partisans of same-sex “marriage” won the day. The same media that uphold a bizarre concept of democracy would be publishing headlines such as “Victory for democracy in Croatia!” For them, democracy exists when the people approve points on the homosexual agenda; when they reject this agenda, the media plays down the result and brands it “homophobic."

"Pray forever in Heaven for us all”
One could ask whether or not the great Croatian prelate, Blessed Aloysius Cardinal Stepinac (1898-1960), a martyr of the Yugoslav communist regime, has interceded with God to obtain such an overwhelming victory for the traditional family in his country.

Indeed, in his spiritual testament, the heroic Cardinal wrote: "I hope that merciful Jesus will give me the grace to pray for all of you in heaven for as long as the world exists and our diocese lasts, so that the goal for which God created you is achieved.”
In the past, Croatia was known as the Shield of Christendom thanks to her glorious defense of Europe against Mohammedan invasions. T

oday, we can deem it as the Shield of the Family. May her example be followed in the West and throughout the world!
Same-sex "marriage" or "civil unions" have now been approved by court rulings in many nations. The promoters of the homosexual agenda are keenly aware that if referendums are conducted, it will be rejected, making patent a truth which they refused to admit: the people in general are opposed to such legalization! That is why the EU is loath to hold popular consultation. Is this democracy?

The small but glorious Catholic Croatia has already begun to suffer international pressure to delegitimize the results of the ballot and reverse the current pro-family situation. It will be a tough fight between David and Goliath, but in the end, God will give victory to His cause.

Posted by Robert Ritchie at 1:17 PM