Marguerite Bourgeoys was born the sixth child of twelve children in Troyes, France in 1620. At the age of twenty, touched by a special grace from Our Lady, and feeling called to the religious life, she applied to the Carmelites and the Poor Clares but was unsuccessful in both ventures.  A priest friend suggested that perhaps God had other plans for her. 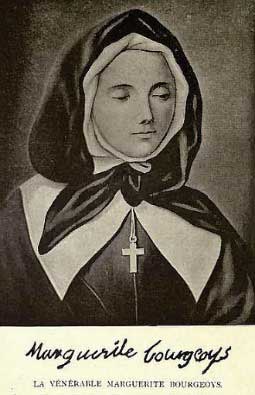 When Marguerite was thirty-four, she was invited by the visiting governor of the French settlement in Canada to start a school at Ville-Marie, today Montreal. She generously accepted and traveled to the French colony then numbering two hundred people. Ville-Marie also had a hospital and a Jesuit mission chapel.

Marguerite started a school, but soon realized her need for help. Returning to Troyes, she recruited a friend, Catherine Crolo, and two other young women. In 1667 they added classes in their school for Indian children.  Six years later, on a second trip to France, Marguerite was joined by six other young women, and had her school approved by King Louis XIV.

The congregation of Notre Dame de Montreal was established in 1676 but their rule and constitutions were only approved in 1698, as orders of non-cloistered religious sisters were then a novelty.

Marguerite and her sisters worked untiringly for the establishment and growth of the French settlement, and when she died in 1700 she was known as “Mother of the Colony”. Marguerite Bourgeoys was canonized in 1982.
Posted by America Needs Fatima at 10:42 AM