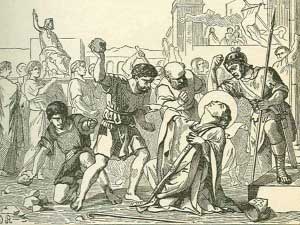 Timothy and Titus were two of St. Paul’s favorite and most trusted disciples.

Timothy had a Greek father and a Jewish mother named Eunice. His grandmother, Lois, was the first to become Christian in the family. Timothy was a convert of St. Paul around the year 47 and later joined his apostolic work. He is the recipient of St. Paul’s Epistles to Timothy in the Gospel. He was with the great Apostle when the church of Corinth was founded and worked with him for fifteen years.

St. Paul sent Timothy on difficult missions, often to face disturbances at churches he had just established, and was installed by Paul as his representative to the church of Ephesus.

Timothy was relatively young for the work he was doing as we read in Tim. 4:12, “Let no one have contempt for your youth,” and that he suffered with his health when we read in Tim. 5:23 “Stop drinking only water, but have a little wine for the sake of your stomach and your frequent illnesses.”

Timothy was with St. Paul in Rome during his house arrest, and at some point was in prison himself. Around the age of eighty he tried to halt a pagan procession and was beaten and stoned to death. 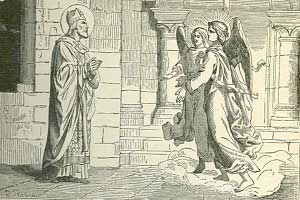 Titus was Greek and a convert from paganism; he is mentioned in several of the Pauline epistles. He is seen as a peacemaker, administrator and great friend of the Apostle Paul. When St. Paul was having trouble with the community at Corinth, Titus was the bearer of his severe letter and with tact, firmness and charity succeeded in smoothing things out, which gave St. Paul great joy.

St. Paul charged Titus with the administration of the Christian community in the Isle of Crete and instructed him to organize the faithful, correct abuses and appoint presbyter-bishops. There is no record of his death.
Posted by America Needs Fatima at 9:19 AM