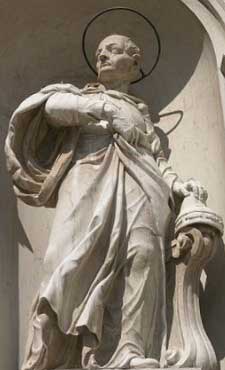 St. Peter Orseolo’s is an unusual life. He was born in 928 of a prominent Venetian family. At twenty he was appointed to the command of the city’s fleet and defeated the Dalmatian pirates who infested the Adriatic Sea.

In 976 there was a revolution in Venice that ended with the violent death of Doge Peter Candiani IV and the partial burning of the city. Although there are allegations that Orseolo was involved in the popular outbreak, the testimonies are inconclusive.

Peter Orseolo was elected doge in place of Candiani and, reputedly, ruled with energy and tact. Still, one night in 978, he secretly left Venice and sought admittance to the Benedictine Abbey of Cuxa, in Rousillon, on the border of France and Spain. Though married for thirty-two years and having an only son who was destined to become one of the greatest Venetian doges, there is early evidence that Peter and his wife had lived as brother and sister since their son’s birth.  As early as 968 there is also evidence that he wished to become a monk.

At Cuxa, Peter Orseolo led a life of the strictest asceticism, and then wishing for an even greater solitude, built a hermitage for himself. He died in 987 and many miracles were said to have taken place at his tomb.
Posted by America Needs Fatima at 12:08 PM