The Sins That Cause Most Souls to go to Hell 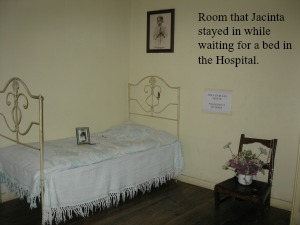 Mother Godinho, who directed the Lisbon Orphanage where Blessed Jacinta Marto stayed shortly before dying at the hospital, carefully wrote down the holy girl’s words.
Two of her notes are outstandingly important today.
The First says, “The sins (that) cause most souls to go to hell are the sins of the flesh.”
With a directly supernatural illumination, that innocent, barely ten year-old girl repeats what Saint Alphonsus Liguori says – sins against chastity “fill hell with souls.”
When Mother Godinho asked Jacinta if she understood what it meant to be pure she answered, “I do. To be pure in body is to keep chastity. To be pure in soul is not to commit sins, not to look at what one should not see…” 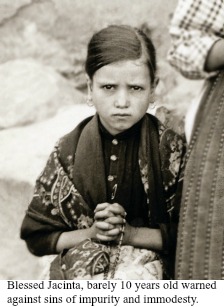 The second, rather prophetic statement is “Fashions that will greatly offend Our Lord will appear.”
It is good to recall that modesty is the outer defense of chastity, the walls defending the castle, as well as the gardens adorning the palace.
The correct question, when it comes to fashion, is not what is the extreme limit at which one is allowed to arrive, but how can one’s attire more clearly manifest love of modesty and the virtue of purity.