by Andrea F. Phillips
Heaven and earth shall pass away, but My words shall not pass away. Luke 21:33

My sister, Teresa, worked for many years for America Needs Fatima in Customer Service. In that position, she heard many a story of woe and wonder, pain and joy, sin and grace.
One such story was that of a lady who called ANF to order a devotional prayer card. In the course of the conversation, she mentioned she had left the Church.
“You are obviously back, though,” asked Teresa.
“Yes,” confirmed the lady, “because of the First Fridays devotion my mother instilled in my brother and I, and because of his tragic death…”
My sister was now sympathizing and curious.
So the lady went on to relate that when she and her brother were children, their mother had taught them the devotion of the Nine First Fridays, which Our Lord Himself revealed to Saint Margaret Mary Alacoque in the seventeenth century. 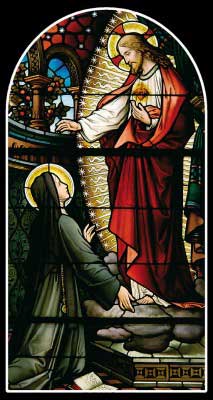 Our Lord told the saint: "In the excess of the mercy of My Heart, I promise you that My all powerful love will grant to all those who will receive Communion* on the First Fridays, for nine consecutive months, the grace of final repentance: they will not die in my displeasure, nor will they die without receiving the sacraments; and My Heart will be their secure refuge in that last hour."
In the company of their pious mother, brother and sister indeed received Holy Communion for nine consecutive First Fridays in honor of the Most Sacred Heart of Jesus.
As they grew, matured, and began to lead their own lives, they were both confused by the innovations in their Church. They watched as the tabernacle was de-centralized, beautiful statues removed, churches built that resembled more assembly halls than places of prayer. For a while, devotions such as that of the Nine First Fridays were also de-emphasized.
Eventually, not recognizing the Church of their youth, they left altogether, and their faith suffered.
Years later, the lady’s brother was driving down a highway when he collided with a freight truck. The truck was ditched, but those who rushed to the scene, were unaware that there was a car lodged somewhere under the massive frame…Inside, was the brother agonizing.
It so “happened” that on that stretch of road, there was a single house. In that house was a man who watched the whole scene. Running out to the spot of the accident, he convinced the rescue personnel that there was someone else, most likely fatally injured, under the wreckage.
On his directions, the rescuers managed to find the lady’s brother. He was badly wounded although still conscious.
And now the man who had assured them of the existence of another vehicle told the rescuers, 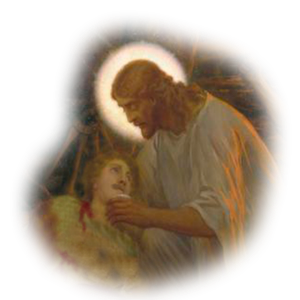 “I’m a Catholic Priest and I’d like to offer the dying man the Church’s assistance.”
And so the lady’s brother, on acknowledging that he was indeed a Catholic, received the last rites. His soul was cleansed, and he was rejoined to Holy Mother Church.
There, on that lonely highway, Our Lord, Who three centuries before, had pledge His word to Saint Margaret Mary, fulfilled His promise to a dying man, who, when a little boy, had received Holy Communion in honor of His Sacred Heart for nine consecutive first Fridays.
What were the “chances” of that?
His sister, on hearing the story, decided there was no “chance” at all. She was so moved by Our Lord’s fidelity to His own promise that, once more confirmed in the faith she had abandoned, also returned Home.

*Provided we are aware of no mortal sin still unconfessed.

Posted by America Needs Fatima at 9:30 AM