Seven Holy Founders of the Servites

Between 1225 and 1227, seven men from prominent families of Florence, Italy, left their lives of luxury and devoted themselves to prayer. 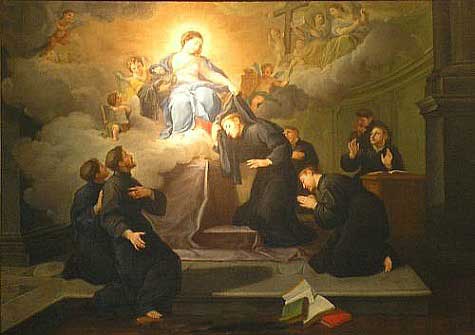 After some time, as they prayed on the feast of the Assumption, the Virgin Mary appeared to them, urging them to devote themselves to her service. Upon making arrangements for their families (two of the seven were married, and two others were widowers), the men withdrew to Monte Senario and established a simple and austere community there.

In 1240, Our Lady again appeared to the seven penitents. This time she asked them to wear a black habit and follow the Rule of St. Augustine and take the name “The Servants of Mary,” or “Servites.”

The seven men were ordained priests, and the order grew and expanded. The Order was not fully recognized by the Pope until 1304, over sixty years after its establishment.
Posted by America Needs Fatima at 9:37 AM