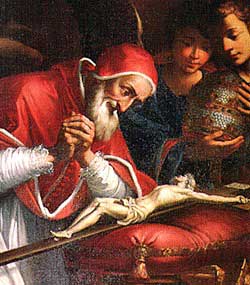 Antonio Ghislieri was born in 1504 in Bosco, in the Tortona diocese. He received the Dominican habit at age fourteen, and after his ordination in Genoa, taught theology and philosophy for some years. He was Prior and Novice Master of several priories during a time of great moral laxity.

In 1556, he was consecrated Bishop of Nepi and Sutri and, the following year, was made Inquisitor General and raised to the rank of Cardinal.

Pope Pius IV transferred him to the bishopric of Mondovi in Piedmont, a diocese that had suffered much from the ravages of war. Under the care and guidance of the new bishop, the region was soon restored to peace and prosperity.

Recalled to Rome at the death of Pius IV, he was chosen as his successor, due in great part to the efforts of St. Charles Borromeo who saw in him the reformer the Church needed.

Taking the name of his predecessor, Pius V immediately introduced a new austerity and sobriety in the Papal States, re-directing sums customarily used for celebrations and festivities to aiding hospitals, poor convents and the truly indigent. He also initiated the tradition of the pope wearing white, as he continued to wear his white Dominican habit after being raised to the papal throne.

With zeal and apostolic energy, he launched numerous reforms, from ridding the Papal States of brigands to passing legislation against prostitution. In countering the widespread practice of granting favors and nominations to family members, or nepotism, he kept relatives at a distance. 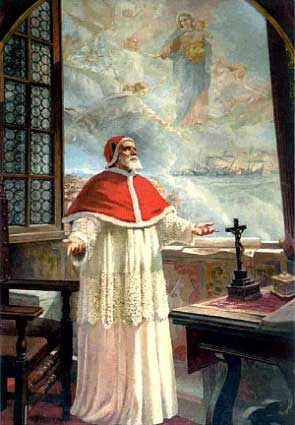 Pope Pius V also had the best edition of Thomas Aquinas’ Summa Theologica published and, in 1567, he declared him Doctor of the Church. He promulgated the Catechism of the Council of Trent and had it translated into foreign languages. He also imposed on all parish priests the duty of using the Catechism to instruct the young in the tenets of the Faith.

Politically, materially and prayerfully, he supported Don Juan of Austria and Marc Antonio Colonna in the war against the Turkish fleet at Lepanto, the maritime battle that broke the Ottoman power in the Mediterranean. From the very onset of the conflict, the Pope had prayed almost continuously, often with arms raised like Moses on the mountain. At the decisive hour of victory, as a Rosary procession wound its way through Rome, the Pope interrupted his work, walked over to a window, and with radiant face, exclaimed, “The Christian fleet is victorious!”

To commemorate the great deliverance on October 7, 1571, he instituted the title of “Our Lady Help of Christians” and the feast of the Holy Rosary.

In the following year the pope was struck with a painful disorder from which he had long suffered, but which his austerities aggravated. He died on May 1, 1572, at the age of sixty-eight.
Posted by America Needs Fatima at 12:05 PM