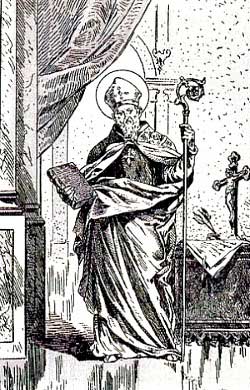 Galdinus was born about the year 1096 into the Della Salla family, of minor Milanese nobility.

He lived in a tumultuous time for the Church in Italy with the Emperor Frederick Barbarossa causing trouble. Opposed to the election of Pope Alexander III in 1159, Barbarossa proceeded to rally a few dissident cardinals that elected another Pope. When the people of Milan sided with the legitimate Pope, the Emperor invaded.

Galdinus, who occupied the post of chancellor and archdeacon under Hubert, the Archbishop of Milan, was obliged to follow the prelate into exile.

In 1165 Galdinus was created Cardinal, and upon the death of Archbishop Hubert, was consecrated his successor by Pope Alexander III himself. The new prelate went about comforting his war-weary people and gathering his dispersed flock. He also re-enforced discipline among his clergy who had, during the troubled times, become lax.

Throwing himself heart and soul into the new undertaking, Galdinus preached constantly, not only healing the spiritual wounds caused by the schism but clarifying the faith to those confused by the heretical doctrine of the Cathars, then widely prevalent in the north of Italy. The Cathari, or Albigensians, rejected the seven sacraments, had special hatred for the Holy Eucharist and Matrimony, and believed that the physical world was all evil. Among their bizarre beliefs was that women must be reborn as men in order to achieve salvation.

On the last day of his life, too weak to celebrate the Holy Sacrifice of the Mass, the ardent shepherd could not be kept from his pulpit. When the zealous preacher came to the end of his discourse, he simply died at his post.
Posted by America Needs Fatima at 8:56 AM