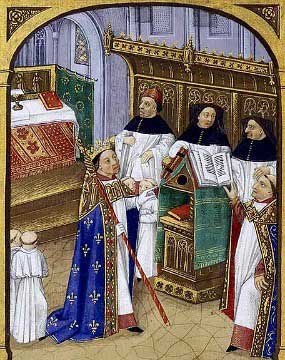 Fulbert is said to have been born in Italy of poor parents. As a student at the Cathedral School of Rheims, he was purportedly one of its most distinguished scholars for when the celebrated Gerbert d'Aurillac, professor of mathematics, became Pope Sylvester II, he summoned Fulbert to Rome.

Upon his return to France, Bishop Odo of Chartres appointed him Chancellor. Under Fulbert's care and direction, the cathedral schools became the greatest educational center in Europe. His pupils esteemed him so highly as a teacher that they called him “venerable Socrates”.

After Bishop Odo’s death, Fulbert was consecrated Bishop of Chartres, and came to be recognized as the counselor of the spiritual and temporal leaders of France.

When the Cathedral of Chartres burned down, he immediately set to rebuilding it, harnessing the financial help of several kings of Europe. Still, this is not the sacred edifice we now know.

Fulbert had a great devotion to Our Lady and composed many hymns in her honor. When the beautiful new cathedral was consecrated, he celebrated the recently introduced feast in honor of her nativity with great solemnity. He was an outspoken opponent of simony and of bestowing ecclesiastical endowments upon laymen. Fulbert was also a prolific writer and his epistles have great historical value, especially on the subject of the liturgical practices of the eleventh century.

After nearly twenty-two years as Bishop of Chartres, he died on April 10, 1029.
Posted by America Needs Fatima at 11:54 AM