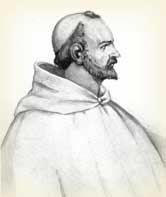 William was born into an illustrious French family and raised in the Benedictine Abbey of Saint-Germain-des-Prés under the tutelage of his uncle, Abbot Hugh.  The regularity of his conduct and virtuous life earned him the admiration of the community.

After being ordained a sub-deacon, he was appointed a canon of the Church of Sainte-Geneviève-du-Mont in Paris where the sanctity of his life greatly annoyed his worldly and lax fellow-canons. They mocked him for his more disciplined life and so persecuted him that William was forced to resign his canonry. However, in 1148, during a visit to Paris by Blessed Pope Eugene III, the latter observed the canonical laxity that reigned at Sainte-Geneviève-du-Mont and replaced the canons with more observant men thus vindicating William’s reputation. Under the direction of the famous Abbot Suger a new canonry with a stricter set of rules was established. William rejoined the community and, in a short time, became sub-prior.

William tempered his zeal for regular discipline with so much sweetness and humility that he led all to practice the rule with joy. The fame of his wisdom and sanctity even reached the ears of Absalon, the Bishop of Roskilde in Denmark, who sent his provost, the historian Saxo the Grammarian, to ask William to come to Denmark to help with the much-needed reforms there.

The prospect of hardships and challenges in the service of Our Lord inspired William to accept the invitation, and he cheerfully traveled to Denmark. There, he was appointed Abbot of Eskilsoë and, although he faced many difficulties both from powerful people and from within himself, he triumphed through prayer and patience. His apostolic zeal and perseverance bore much fruit for the Catholic Faith in Denmark during the thirty years he lived among the Danes. He also founded the Abbey of St. Thomas in Aebelhold (Ebelholt) in Zeeland and traveled to Rome to intercede with the Pope on behalf of the king’s sister, Ingelburga, who had been repudiated by her royal husband, King Philip Augustus of France.

William died in Denmark on April 6, 1203 and was canonized in 1224 by Pope Honorius III.
Posted by America Needs Fatima at 9:40 AM