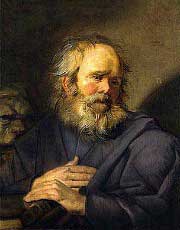 It is this same Mark who is later imprisoned with Paul in Rome. As proof of how much his personal opinion concerning Mark had changed during their joint captivity, the Apostle to the Gentiles afterwards writes to Timothy in Ephesus, “…take Mark and bring him with thee, for he is profitable to me in the ministry.”

Tradition strongly affirms that Mark, the author of the second gospel, was more closely associated with St. Peter. Clement of Alexandria, Irenaeus and Papias speak of Mark as being Peter's interpreter. Writing from Rome, Peter refers to “my son, Mark” (1 Peter 5, 13) who apparently was there with him. This is undoubtedly Mark the Evangelist.

Ancient tradition relates that Mark lived for some years in Alexandria as bishop of that city, and there suffered martyrdom.

The city of Venice claims to possess the remains of St. Mark the Evangelist, brought there from Alexandria in the ninth century. Preserved by the Venetians for centuries, their authenticity has not gone unchallenged. From time immemorial, however, St. Mark – Apostle and Evangelist – symbolized by the lion, has always been honored as patron of this "Queen of the Adriatic."
Posted by America Needs Fatima at 12:11 PM