Solemnity of All Saints

The Solemnity of All Saints is celebrated on November 1 and was instituted to honor all the saints, those known and the vast number of those unknown.

The solemn commemoration of each martyr’s death became a practice among the early Christians who would gather at the place of their martyrdom on the anniversary of their death. Groups of martyrs who died on the same day were naturally commemorated together on the same day. However, during the persecutions of Diocletian in the third century, such was the vast number of Christian martyrs that the Church, desiring that each should be honored and venerated, a common day was appointed for all of them. At first only the martyrs and the Precursor, St. John the Baptist, were venerated in this solemn manner. Gradually, as a regular process of canonization was established, other saints were added to this practice. 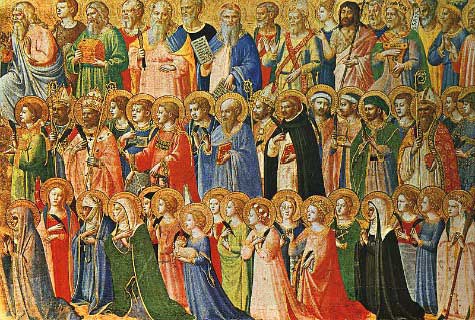 The Forerunners of Christ with Saints and Martyrs (c.1423-24)
Tempera on wood by Fra Angelico – National Gallery, London
In the year 609 or 610, Pope Boniface IV had 28 wagon loads of the martyrs’ bones carted to the Pantheon, a Roman temple dedicated to the pagan gods. On May 13, he rededicated the temple as a Christian church and consecrated it to the Blessed Virgin and All the Martyrs. The Pontiff had the relics of the martyrs buried beneath it in order that, “the memory of all the saints might in the future be honored in the place which had formerly been dedicated to the worship not of gods but of demons,” according to the Venerable Bede.  From this date, on which the translation of the relics of the early Christian martyrs took place, the Pope ordered the solemn commemoration of their memory. In the following century, Pope Gregory III dedicated a chapel in the Basilica of Saint Peter to All the Saints and fixed November 1 for their solemn feast day.  A hundred years later, his namesake, Pope Gregory IV, extended the celebration of the Feast of All Saints to the universal Church.
Posted by America Needs Fatima at 10:29 AM