The future abbess was born of devout parents in Soissons, France in the first half of the seventh century. From an early age, she felt drawn to God and resolved to renounce the world in pursuit of eternal truths. In this resolution she was encouraged by St. Ouen the Bishop of Rouen. With the consent and support of her parents she entered the monastery of Jouarre, near the city of Meaux, recently founded under the rule of St. Columban. 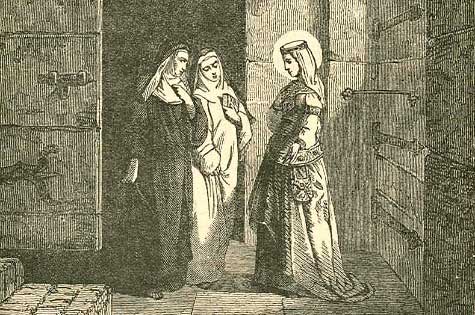 Here she was formed in the strictest practice of monastic perfection and became a model of perfect obedience and piety. She was also remarkable for her prudence and tact and the duties of hospitality, ministering to the sick and infirm, and the care of the children educated at the monastery were in turn committed to her charge. Bertilla, however, had also a very strong temperament with a serious flaw: a temper. Her eighth-century biographer recounts the following incident in the life of the Saint:

“Once, when a troubled sister spoke angry words to her, Bertilla called down divine judgment upon her. Although the fault was forgiven, Bertilla worried about her curse. Then the sister died unexpectedly, choked by asthma. Not having heard the signal for the funeral, Bertilla asked the reason for the resounding chorus of psalms. When she learned of the sister’s death, she trembled fearfully. She hurried to the place where the little body lay lifeless and with great faith laid her hand on the dead nun’s breast. Bertilla ordered her receding soul through Jesus Christ, the Son of God, not to leave, but before she spoke with Him, to forgive her anger against her. And God permitted the spirit that had left the body to return to the corpse. To the amazement of all, the revived cadaver drew breath. Looking at the servant of God, she said: “What have you done, sister? Why did you retrieve me from the way of light?”
“I beg you sister,” said Bertilla humbly, “to give me words of forgiveness, for once I cursed you when you had a troubled spirit.”
“May God forgive you,” said the nun. “I harbor no resentment in my heart against you now and I love you. Please entreat God for me and permit me to go in peace and don’t hold me back. For I am ready for the bright road and now I cannot start without your permission.”
“Go then in the peace of Christ,” said Bertilla, “and pray for me, sweet sister.”

When St. Bathildis, the wife of King Clovis II, founded the Benedictine Abbey of Notre-Dame-des-Chelles about the year 658, Bertilla became its first abbess. She governed the abbey with austerity and virtue, attracting many by her example. The saintly queen herself retired to Chelles in 664 and died there in 680. Attracted by the news of the holy abbess, Hereswitha, the sister of St. Hilda and widow of the king of the East Angles, also joined. Having served as Abbess of Chelles for forty-six years, during which time her reputation for humility and gentleness spread widely, Bertilla died around the year 705.
Posted by America Needs Fatima at 11:33 AM