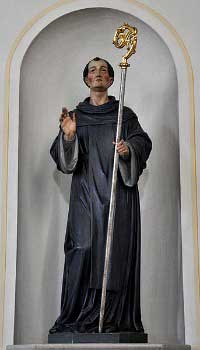 Columban was born about the year 543 in County Meath, in the Irish province of Leinster, to respectable parents. He was well-educated in grammar, rhetoric, geometry, and the Holy Scriptures. The young Columban resolved early to embrace monastic asceticism and dedicate himself to a strict and disciplined life, abstaining from many of the pleasures of the world. However, he struggled with purity, and desperate to dedicate himself wholly to God, asked the advice of a religious woman who had lived as a hermit for many years.

His mother tried her utmost to deter him from the course of action proposed by the saintly hermit, but Columban took the holy woman’s advice and left Leinster to become a cloistered monk at the monastery of Bangor in County Down. He remained there a number of years before gaining permission from his superior, St. Congall, to evangelize in foreign lands. With twelve companions he traveled to Gaul and set about preaching and teaching the Gospel.

In 590, news of these monks reached Guntramnus, the King of Burgundy, who was so inspired by the holy men that he gave the Irish monk and his companions the ancient Roman castle of Annegray, in the region’s Vosges Mountains, in which to establish a monastery. Within a few years, the increasing number of followers obliged Columban to expand and, with the help of one of the King’s ministers, he obtained from the King another ancient Roman fortification named Luxeuil, on the site of some ancient Roman baths. A third monastery soon followed to house the growing number of disciples. The monks followed a harsh discipline similar to the unusual characteristics of Celtic Christianity: they carried out penances for every transgression, no matter how small, fasted, performed bodily mortifications and prayed at length.

Twenty years after his first monastic foundation, Columban and his fellow Irishmen were expelled from the country. Brunhilda, the wicked and corrupt queen regent, disliked the holy man for his reproach of the immoral ways of her court and ultimately exiled him in 610.

Columban and his monks traveled to Italy where they were welcomed by Agilulf, King of the Lombards. Agilulf gave the monks a dilapidated church at Bobbio to reestablish themselves. Columban himself did much of the repairs in spite of his seventy years of age.

He died at Bobbio in 615 having spent the last few years of his life praying and preparing for death. His followers established monasteries all over Europe.
Posted by America Needs Fatima at 9:13 AM