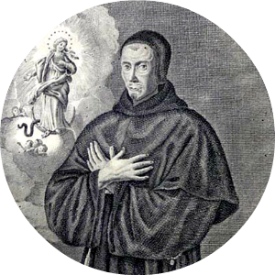 This son of the soil became one of the most illustrious preachers in the history of the Franciscan Order.

Born Donato Antonio Giovanni Nicola Fasani on August 6, 1681 to poor peasants in the Neapolitan town of Lucera, he lost his father at the age of nine. “Giovanniello”, or “Johnnie” as he was commonly called, was sent by his step-father to the Conventual Franciscans in his native town for his education. At fifteen, he entered the Franciscan novitiate at Monte Gargano taking the founder as his patron.

Remarkable among the young friar’s most cherished devotions was his tender love for the Immaculate Conception of the Blessed Virgin Mary – not a dogma of faith at the time – his childlike affection for the Infant Jesus and his ardent devotion to the Most Holy Eucharist.

In 1703 Brother Francis Anthony was sent to Assisi to continue his studies and two years later he was ordained to the priesthood. In Rome he received his doctorate in theology at the College of St. Bonaventure. First appointed lector of philosophy at the Franciscan college in Lucera, he was successively promoted to regent of studies, guardian and, ultimately, provincial superior, an office he held from 1721 to 1723. He later served as master of novices and then as pastor of the Church of St. Francis in his native town. When a bishopric was offered to him, he declined it.

A true shepherd of souls, his apostolic zeal was firmly grounded on an intense and deep interior life. His life of prayer was fortified by mortification, severe penances, and long hours spent in Eucharistic adoration. He was beloved by the poor, spent much time in visiting the sick and the aged, orphans and the imprisoned. Among the latter, his apostolic zeal embraced in a particular manner those condemned to death, whom he accompanied to their execution. He was much in demand as a confessor, spiritual director and preacher for which his ardent and filial love for the Blessed Mother was the inspiration. He gave retreats, led Lenten devotions and novenas and collected gifts for the children at Christmas.

Widely regarded in his own lifetime as a second St. Francis of Assisi, he died in 1742 just as he was beginning the solemn novena for the feast of the Immaculate Conception. Upon hearing of his death, the poor children of Lucera ran through the streets, crying "The saint is dead! The saint is dead!" In this humble Franciscan they had lost a true father and protector.
Posted by America Needs Fatima at 11:40 AM