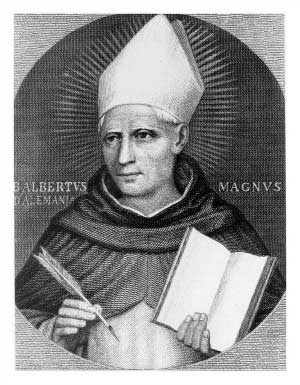 Albert Bollstadt was born at the German castle of Lauinger on the River Danube in 1206. Nothing is known of his youth, but he studied at the University of Padua and in 1222, became a Dominican, much to the anger of his family. He taught at Cologne in 1228, and later, at a University in Paris, where he received his doctorate in 1245. He returned to Cologne in 1248 upon the request of his Dominican superiors to establish a school of advanced learning. He became regent of the school there, and during that time taught St. Thomas Aquinas.

Albert was well learned in physics, geography, astronomy, mineralogy, chemistry and biology, and authored many writings on these subjects. His reputation as a scientist grew from his endeavors at Cologne. He carried on experiments in chemistry and physics created a large collection of plants, insects and chemical compounds. However, he is most renowned for allowing the philosophies of Aristotle to become acceptable to Catholicism: with his learned background, he rewrote the works of the great man using the science of theology.

In 1260, he was appointed Bishop of Regensburg but resigned after less than three years. However, he was still called upon to advise Pope Urban IV and was sent on several diplomatic missions. He lived the rest of his life in Cologne, traveling to Lyons in 1274 to take part in the council there.  His final appearance in public was in Paris where he defended the teaching of his late student, Thomas Aquinas.

He died in Cologne on November 15, 1280 and is buried in the Church of St. Andrea. He was canonized and declared a Doctor of the Church in 1931 by Pope Pius XI. For his great knowledge and scientific writings, he is considered the patron of scientists.
Posted by America Needs Fatima at 10:54 AM