Several commentators on the Passion hold that, from
the height of the cross, Our Lord Jesus Christ had an all encompassing knowledge of every person - from the
beginning of times to the end of the world - who would
profit from the shedding of His divine blood and thus
attain eternal salvation. 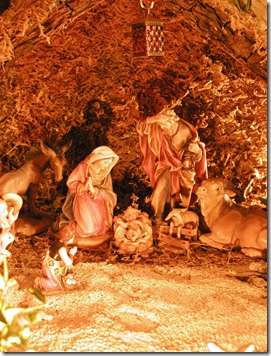 As we celebrate Christmas 2008, it is another scene that attracts our imagination.

Rather than the tragic yet majestic scene of Our Lord nailed to His cross, it is the tranquil scene of the same Jesus in the loving embrace of His mother and under the watchful and adoring gaze of Saint Joseph, graciously receiving the homage of both king and shepherd alike.

Can we not reasonably conjecture that from the sweet "throne" that was His mother's lap He likewise peered into the centuries of Christianity and saw every
Christmas that was to come, including this present Christmas?

Did He not thus see America on this Christmas in a state of war against terrorism?  Did He not see innumerable American families grieving for the  irreparable loss of husbands, wives, mothers, fathers, children, friends?

As God, He certainly knew of our predicament and,
being a God of incalculable goodness, He had already
desired to bridge the infinite gap between divinity and
humanity by taking flesh and being born in a stable,
later to expire on a cross.

He did so not just to share in the earthly fate of all mankind, but to save those who would truly follow Him by taking up their own crosses as He requires. Moreover, as if He hadn't done enough by taking flesh and shedding His last drop of blood for us, He devised and instituted the incredible gift of the Holy Eucharist to nourish, strengthen, and accompany us in our earthly journey.

In this hour of need, increasing numbers of Americans
are turning to God in the Eucharist, in their churches and in more than seven thousand adoration chapels across our country.

Alas, with all our devotion, goodness, bravery, and good will, we are, nonetheless, a sinful nation. It is from the depths of an abyss of relativism, indulgence, and sin
that we cry out to God to bless us and have mercy on us.

Yet, after all, in the hour of darkness, it was to Him, the true and crucified God, that, as a nation, we did turn.
So, it is proper that we speak of both the cross and the crib during this Christmas season.

May Our Lord Jesus Christ from the height of His cross forgive us our sins and grant us the grace of full conversion as a country.

And may the same Jesus from His mother's knees bless all Americans of good will.  May He especially bless all those most affected by the war on terrorism as well as those fighting for all the good for which America stands.

May the coming year find us ever more united as a nation but, above ever closer to Him in the fullness of His Truth.