Go against the grain: obey to be free!

I read a quote about obedience to the rule from Saint Claude de la Colombiere that goes against all the false notions of freedom out there. 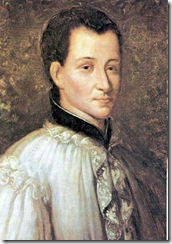 "I experienced great joy at seeing myself bound with a thousands chains to do the will of God.  The thought of this obligation, far from terrifying me, filled me with intense joy; far from being a slave by it, I felt that I had entered the Kingdom of Liberty and Peace."

His thought reminded me of a remarkable article on the same topic by Prof. Plinio Correa de Oliveira which I add below for your spiritual benefit.

Obey to Be Free

No, dear atheist. Giving a distant echo to the words of the Bishop Saint Remigius upon baptizing Clovis, the first Christian King of the Franks, I say to you: "Burn what you have adored and adore what you have burned." Yes, burn egoism, doubt, apathy, and, moved by the love of God, love and serve and fight for the Faith, for the Church, and for Christian Civilization. Sacrifice yourself. Renounce yourself.

How? As they did throughout the ages, those who fought for Jesus Christ the "good fight" (2 Tim. 4:7).

And you will do it remarkably well if you follow the method defined and justified by St. Louis Marie Grignion de Montfort. It concerns the "slavery of love" to the Most Holy Virgin.

Slavery ... a harsh and strange word, especially for modern ears, accustomed to hearing talk at every moment about disalienation and freedom, and more and more inclined to the grand anarchy which, like the grim reaper with scythe in hand, seems to laugh sinisterly at men as it waits for them at the threshold of the exit from the twentieth century.

Now, there is a slavery that frees, and a freedom that enslaves.

A man fulfilling his obligations was formerly said to be a "slave of duty." In fact, he was a man at the height of his liberty, a man who, through a completely personal act of will, understood the ways that befell him to follow, deliberated with manly vigor to pursue them, and overcame the assaults of the disorderly passions that tried to blind him, weaken his will, and block the way he had freely chosen. Free was the man who, having gained this supreme victory, walked with a firm step in the proper direction.

On the contrary, he who allowed himself to be dragged by the unruly passions in a direction neither approved by his reason nor preferred by his will, was a "slave." These really defeated people were called "slaves of vice." By slavery to vice, they had "liberated" themselves from the wholesome dominion of reason.

With his brilliant skill, Leo XIII explained these concepts of liberty and servitude in his encyclical, "Libertas."

Today everything is inverted. A "hippie" going about aimlessly with a flower in his hand, or spreading terror at his pleasure with a bomb in his hand, is regarded as a model of a "free" man. On the contrary, whoever lives in obedience to the laws of God and of men is considered to be bound rather than free.

In the current perspective, free is one whom the law permits to buy the drugs he wants, to use them as he wishes, and, finally, enslave himself to them. Enslaving and tyrannical is the law forbidding man to become enslaved to drugs.

In this cross-eyed perspective derived from an inversion of values, the religious vow by which a monk, in all awareness and in all freedom, renounces any step backward and surrenders himself to the abnegated service of the highest Christian ideals, is enslaving. In that act, in order to protect his decision against the tyranny of his own weakness, the monk subjects himself to the authority of vigilant superiors. Today, whoever thus binds himself to conserve himself free from bad passions is liable to be considered a vile slave, as if his superior imposed upon him a yoke that cut off his will. Instead, the superior serves as a handrail for elevated souls that aspire, freely and fearlessly-without yielding to the dangerous vertigo of the heights-to reach the top of the stairways of the highest ideals.

In brief, some consider him free who, with his reason fogged and his will shattered and driven by the madness of his senses, is capable of sliding voluptuously downward in the toboggan of bad manners. And he is a "slave" who serves his own reason, overcomes with his will power his own passions, obeys divine and human laws, and puts order into practice.

In that perspective, "slave," above all, is he who, in order to more completely guarantee his liberty, freely chooses to submit himself to authorities that guide him toward his goal. This is how far we are led by the present atmosphere, impregnated with Freudianism!

It was from another perspective that Saint Louis De Montfort devised the "slavery of love" to Our Lady, a slavery proper to all ages and to all states in life: layman, priest, religious, and so on.

What does the word "love" mean here, joined to the word "slavery" in a surprising way, since the latter is dominion brutally imposed by the strong upon the weak, by the egotistical upon the wretched whom he exploits?

The holy affection and the duties of matrimony have something that bind, that join, that ennoble. In Spanish, handcuffs are called "spouses." The metaphor makes us smile; and since it alludes to indissolubility, it can bring a chill to those who believe in divorce. In English we speak of the "bonds" of matrimony. More binding than the state of a married man is that of a priest. And, in a certain sense, still more binding is that of the religious. The higher the state freely chosen, the stronger the bond, and the more authentic the liberty.

So, Saint Louis De Montfort proposes that the faithful consecrate themselves freely to the Blessed Virgin as "slaves of love," giving her their bodies and souls, their goods, both interior and exterior, and even the value of all their good actions, past, present, and future, so that Our Lady might dispose of them for the greater glory of God, in time and in eternity (cf. "Consecration to Jesus Christ, the Incarnate Wisdom, through the Blessed Virgin Mary"). In exchange, as a sublime Mother, Our Lady obtains for her "slaves of love" the graces of God that elevate their intellects to the most lucid understanding of the highest themes of the Faith, that grant their wills an angelic strength to rise freely to those ideals and to conquer all the interior and exterior obstacles that unduly oppose themselves to them.

But, someone will ask, how will a monk, already subject under vow to the authority of a superior, be able to begin practicing this diaphanous and angelic liberty?

Calling all men to the heights of liberty afforded by the "slavery of love," Saint Louis De Montfort employs terms so prudent that they allow ample room for important nuances. His "slavery of love," so replete with special meaning for the persons bound by vow to the religious state, can be equally practiced by secular priests or laymen because, unlike the religious vows that bind for a certain period or for an entire life, the "slave of love" can leave this most elevated condition at any moment without ipso facto committing sin. And while the religious who disobeys his rule incurs a sin, the lay "slave of love" does not commit any sin by the simple fact of contradicting in something the total generosity of the gift he made. The layman maintains himself in this condition of slavery through a free act, implicitly or explicitly repeated each day, or better, at each instant.

The "slavery of love" is, then, for all the faithful that angelic and supreme liberty with which Our Lady awaits us at the threshold of the twenty-first century, smiling and attractive, inviting us to her reign, according to her promise in Fatima: "Finally, my Immaculate Heart will triumph."

Come, dear atheist, convert and walk with me, with all the "slaves of love" of Mary, toward that reign of supremely ordered freedom and of supremely free order, to which the Slave of Our Lord, the Queen of Heaven, invites you.