Born about the year 422 in Nanterre, a small village outside of Paris, Geneviève was the daughter of respectable townsfolk. At the age of seven, she was singled out from a crowd of her fellow inhabitants by St. Germain of Auxerre who foretold to her parents their child’s future sanctity. The missionary prelate was on his way to Britain with St. Lupus of Troyes, commissioned by the bishops of Gaul to combat the heresy of Pelagian there. Before his departure, Geneviève renewed her consecration in his presence, received his blessing, and was given a medal engraved with a cross in remembrance of her dedication to Christ. 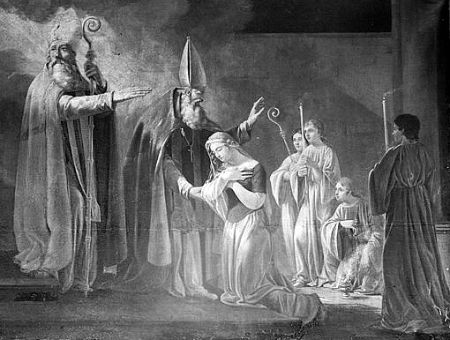 On the death of her parents she went to Paris, and lived with her godmother. She devoted herself to works of charity and practiced severe fasting and physical austerities. She continued these mortifications for over thirty years until her superiors compelled her to diminish them. Many of her neighbors accused Geneviève of being an impostor and a hypocrite. Her numerous visions and prophecies were treated as frauds and deceits. Driven by their envy and jealousy, her enemies eventually conspired to drown her. It was only through the intervention of St. Germain of Auxerre himself that their animosity was finally overcome. The bishop of the city appointed her to look after the welfare of the virgins dedicated to God, and by her instruction and example she led them to a high degree of sanctity.
In 451 as Attila and his Huns swept through Gaul, pillaging and destroying all in their path, the inhabitants of Paris prepared to flee. Geneviève prevailed upon them to place their trust in God and urged them to avert the scourge by prayer and penance, assuring them of the protection of Heaven. The advancing barbarian hordes inexplicably changed the course of their advance and headed towards Orléans, leaving Paris untouched. From henceforth, she was looked upon as the mother of the city of Paris and her prayers and intercession were universally sought in every malady and affliction.
Some years later, the city was again besieged and the people suffered greatly from sickness and famine. Geneviève was indefatigable in seeking relief for their needs, even calming a furious storm by her prayers when it threatened to overwhelm and sink the vessels loaded with provisions for the starving population. Through her influence, the new king and his successors displayed unwonted clemency towards the citizens. They regarded her with great veneration and respect and frequently pardoned malefactors and released prisoners, through her intercession. When King Clovis ascended the throne, he converted to Christianity and was baptized on Christmas Day, 496. He made Paris his capital and established an abbey dedicated to Saints Peter and Paul on the south bank of the Seine.
Geneviève died in the year 512 and when the church was completed, her body was placed in a solid stone tomb and interred there. The numerous miracles wrought at her tomb, caused the name of Sainte-Geneviève to be given to it. Kings, princes, and people enriched it with their gifts. This heroine who twice saved the capital of France by her courage and constancy is regarded as the Patroness of Paris. Her feast is kept on January 3.
Posted by America Needs Fatima at 9:52 AM