Some saints only come to light after their death. St. Thorfinn is one of these.

A Norwegian bishop, he lived the last years of his life at the Cistercian Monastery of Ter Doerst in Flanders, Belgium.

In this Flemish monastery the foreign bishop remained hidden and unknown until some fifty years after his death. It was in the course of some building operations within the monastery that his tomb was opened and his remains were found to exude a strong and sweet perfume. 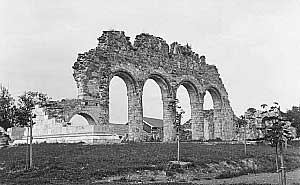 Ruins of the Cathedral of Hamar, Norway
On inquiry, a monk by the name of Walter, remembered the exiled bishop as a person who had a quiet, kind, yet strong presence. He was then asked to write his recollections of him.

Still, little is known of St. Thorfinn except that he was Bishop of Hamar in Norway and had been outlawed, along with two other bishops, by King Eric of Norway over a dispute regarding rights granted to the clergy by the previous king.

After numerous hardships, including shipwreck, the holy bishop had made his way to the Abbey of Ter Doerst in Belgium.  St. Thorfinn died on Janurary 8, 1285.
Posted by America Needs Fatima at 9:50 AM