The Only Thing That Could Save You

When Saint Francis Borgia (1510-1572) was in Rome, a cleric came to speak with him. The saint, being busy with many things, sent his good friend, Father Acosta to see him.
The cleric said to him: "Father, I am a priest and a preacher, but I live in sin, and distrust the divine mercy. A most amazing thing has just happened to me. After preaching a sermon against the stubborn, who afterwards despair of pardon, a person came to me to make his confession. This stranger then narrated to me all my sins, and at length told me that he despaired of the divine mercy! In order to do my duty, I told him that he must change his life, and trust in God. At that very moment, he rose to his feet and reproached me, saying: ‘you, who preach thus to others, why do you not amend, and why do you distrust? Know, that I am an angel come to your aid; amend and you will be pardoned.’” 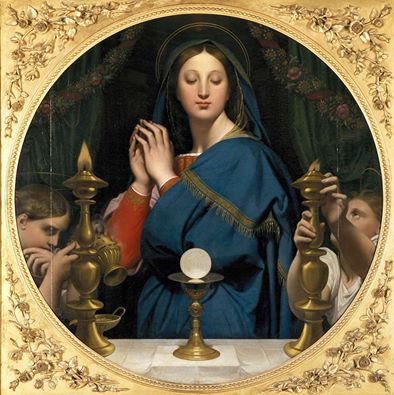 The priest continued, “When he had said this, he disappeared. I abstained for several days from my sinful practices, but when temptation came I again returned to my sins.
On another day, as I was celebrating Mass, Jesus Christ sensibly spoke to me from the Host, and said: 'Why do you thus maltreat me, when I treat you so well?' After this I resolved to amend, but at the next temptation fell again into sin.”
Shaking his head in sorrow, the cleric continued, “A few hours ago, a youth came to me in my apartment, and drew from under his mantle a chalice, and from this a consecrated Host, saying: 'Do you know this Lord Whom I hold in my hand? Do you remember how many favors he has done you? Now behold the punishment of your ingratitude,' and saying this he drew a sword to kill me.
I then cried out: 'For the love of Mary do not kill me, for I will indeed amend.' Replacing the sword from where it was drawn, he replied: 'This was the only thing that could save you: make a good use of this grace, for this is the last mercy for you.' Then he left me, and I came immediately here, begging you to receive me among you."
Father Acosta consoled him, and the priest, by the advice also of Saint Francis, entered another order of strict observance, where he persevered in holiness till his death.
From the Glories of Mary, by St. Alphonsus Maria de Liguori.
Posted by America Needs Fatima at 9:59 AM