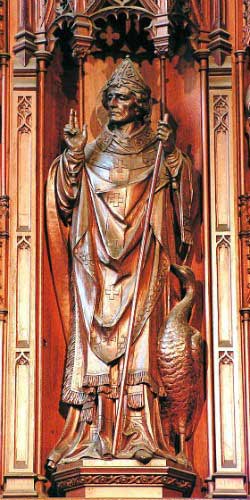 Wulfstan (Wulstan) was a native of Warwickshire, England.  After his priestly ordination, he became a novice at the monastery of Worcester where he edified all by the innocence and sanctity of his life. He was assiduous at prayer, often watching all night in church.

The first task assigned to him at the monastery was the instruction of children, then treasurer and eventually - though against his fierce resistance - he was made prior. In 1062, he was elected Bishop of Worcester.

Wulfstan was a powerful preacher, often moving his audience to tears.

To his vigorous action is particularly attributed the suppression of the heinous practice among the citizens of Bristol of kidnapping men into slavery and shipping them over to Ireland. St. Patrick who became the great apostle and patron of the Irish was such a slave in his youth.

After the Norman conquest of England, William the Conqueror was initially uncertain about Wulfstan. But acknowledging his capacity and uprightness, Wulfstan was the only bishop William retained at his post under the new rule.

For the next thirty years Wulfstan rebuilt his cathedral, cared for the poor and put forth great effort in alleviating the harsh decrees of the Normans upon the vanquished Saxons. Whenever the English complained of the oppression of the Normans, Wulfstan told them: “This is a scourge of God for our sins, which we must bear with patience.”

The saintly bishop died on January 19 at eighty-seven years of age after washing the feet of a dozen poor men, a humble ritual he performed daily. He was canonized in 1203.
Photo by: Christopher Guy
Posted by America Needs Fatima at 11:09 AM