Baldwin I of Jerusalem receives help from King Sigurd and his 10,000 Vikings

After the fall of Jerusalem, a large number of the crusaders returned to Europe, leaving the remainder in a precarious position. On the land they were completely surrounded by hostile Moslems, who viewed the militant Christians as sworn enemies of Islam.

To the north and east, the territory of the Seljuk Turks had broken down into city-states but were loosely unified under the sultan in Baghdad. To the south and west, the Fatimid Egyptians had formed an empire with Cairo as its capital. Any unification of the Saracens and Turks under one strong, capable leader could prove to be disastrous, for they greatly outnumbered the Christian soldiers. 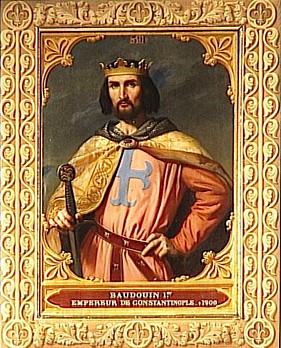 Godfrey of Bouillon was elected King of Jerusalem but refused the title and crown in a city where Christ had worn thorns. His brother Baldwin returned to the County of Edessa which he had carved out earlier. Bohemond, of course, had remained in Antioch, but soon he went to Europe, unsuccessfully seeking after other ambitions. Just to the south of the Norman principality, the Provençals of the contentious Raymond of Toulouse prepared to attack the fortified city of Tripoli and form the county of that name. In theory, the last three vassal states recognized the King of Jerusalem as their suzerain, but the arrogant, grasping nature of most of the princes interfered with any complete cooperation. Only Godfrey made any attempt to practice virtue in his relations with others, but unfortunately he was dead within the year.

The nobles of Jerusalem chose Baldwin to replace his brother. His elevation to the throne brought an amazing transformation of a selfish landowner into a fighting crusader. Anything less than maximum courageous leadership would have brought down the crusader states. When the Rhinelander prince assumed control with only 3,000 fighting men, his power did not extend more than 12 miles outside Jerusalem. 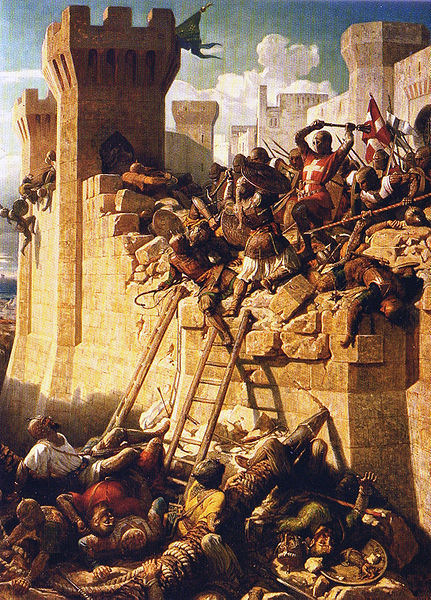 In order to secure his kingdom, Baldwin fought several pitched battles against enormous odds with the surrounding Mohammedans, losing some and winning most. Completely landlocked at the beginning with the exception of the harbor at Jaffa, the dedicated King achieved his greatest success in the capture of the fortified cities along the coast. Arsuf and Caesarea fell in 1101 with the help of a Genoese fleet. Another Genoese fleet aided in the capture of Acre in 1104. The Italian merchantmen received ample commercial concessions for their effort.

The most colorful assistance came from Norway and their King Sigurd, who had taken the Cross. Ten thousand Viking-crusaders in sixty ships followed their King around Spain, fighting many battles with the Moors, and into the eastern sea where they spotted a Moslem fleet blockading Acre. When the Saracens saw the lines of dragon ships moving towards them with their long oars sparkling in the sun, they quickly raised the siege and fled. The Northmen then feasted with their grateful host and went on a pilgrimage to Jerusalem. 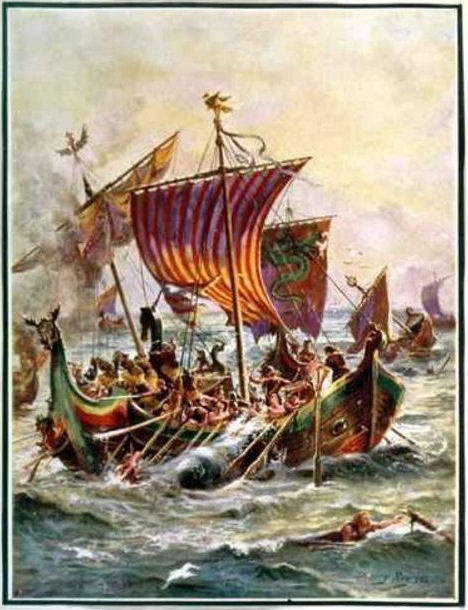 Painting by Henry A. (Harry) Payne

After the Norwegians prayed at the Holy Sepulchre and said the Stations of the Cross, they asked Baldwin to name one city he most desired to conquer. He named Sidon, the impregnable ancient citadel. From the sea the Northmen, using ropes and scaffolding, scaled the massive walls and with their fearsome axes cut through the Moslems. Sidon surrendered and the surviving defenders left with their lives and whatever they could carry. Laded with spoils and gratitude, the hearty Norwegians returned home. Along the coast only Ascalon and Tyre remained in Moslem hands when Baldwin died in 1118.

Short Stories on Honor, Chivalry, and the World of Nobility—no. 61

Next post: The Bartlett pear is called “The Good Christian” in France, after St. Francis of Paola introduced it