Why we spent Good Friday on the streets of Akron, Ohio doing reparation for blasphemy

On Good Friday, April 22, First Grace United Church of Christ in Akron, Ohio held a blasphemous homosexual mockery of Our Lord called “Corpus Christi.” The play used Gospel passages in a contrived way to portray Christ and the Apostles as degenerates. 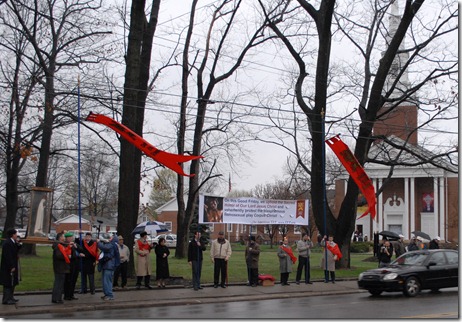 As Saint Veronica did during the passion, 27 brave Catholics gathered at the place of infamy to pray and humbly offer reparation. A cold wet April shower did not dampen the singing of hymns or prayers but instead displayed the seriousness and resolution of those present. 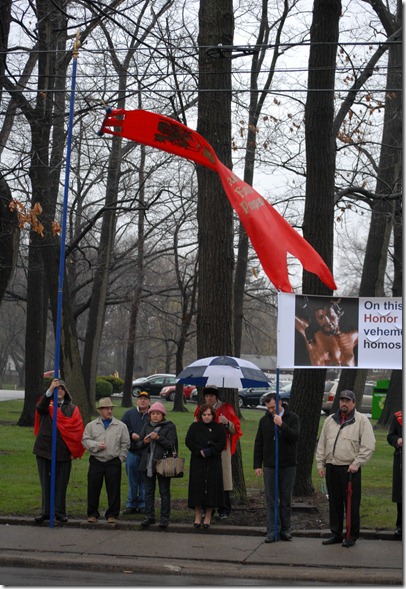 “This is the best way to observe Good Friday,” said Christopher Henderson from Cleveland, Ohio. “We doing a real ‘Way of the Cross’ by standing here and defending the honor of Our Lord Who in a will be crucified and mocked by this production.”

Tens of thousands of America Needs Fatima members e-mailed or phoned the First Grace United Church of Christ to peacefully voice opposition to this insensitive attack. On Good Friday they were also asked to make an act of reparation to the Sacred Heart.

Three homosexuals, attempting to disturb the rally, accused everyone of secretly being homosexuals or of abusing children. One, a former Catholic, diabolically tempted 16-year-old Joseph Jordon to also “leave the Catholic Church in order to freely enjoy all pleasures.” Joseph retorted, “True happiness does not come from the pursuit of sin but in following Jesus and carrying one’s cross.” The ex-Catholic then began mocking the rosary by crawling on the ground repeating, “Worship the goddess; holy goddess, worship the goddess.”

The other hecklers, one dressed in a rainbow colored jacket, verbally attacked the Church and held signs saying “Jesus loves fags gays” and another saying “God is here and boy is she p***ed.”

After 20 minutes of unsuccessful heckling, the rally continued without them for an additional two more hours. The gathering solemnly ended with the Consecration to Our Lady by Saint Louis de Montfort and a procession with Our Lady to the sound of Hail Holy Queen and Throne above. 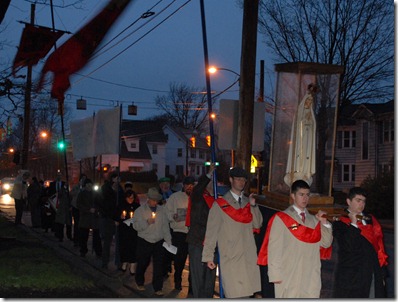 Posted by Robert Ritchie at 2:24 PM