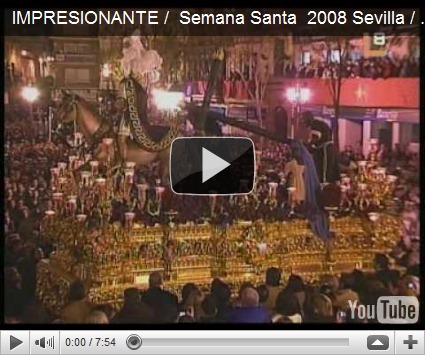 A personal account of Holy Week in Seville by a friend:

In the early hours of the morning of Holy Friday, a night
when no one in Seville goes to sleep, the streets are so
crowded that at times you cannot even walk.

Accompanying Our Lord, Who is under arrest and Whose Passion has begun, the brotherhoods come out in procession with their
statues.

This night alone, more than 10,000 Nazarenes and
penitents parade. The public attending these processions
numbers in the hundreds of thousands.

But is everything edifying and pious? Would it be possible
for a great modern city of today, with all its youths on the
streets, to think only about prayer and devotion? Not really.

Nor is it possible to avoid some grotesque scenes. Yet, when
confronted with one, I was also touched by the sublime.
Squeezed against the front door of a house I had just
passed by, amid the reverent multitude, was the statue of
Christ of the Great Power, with His tunic moving rhythmically
with His painful and hesitating steps.

On the bridge upon the Guadalquivir River, with a sharp cold wind rising from the river and the long and sharp-pointed hoods outlining the night of Seville illuminated with a full moon, I had
also followed the float of The Lord of the Three Falls, when
the float of The Virgin of Hope of Triana was still far away.

At that point I had crossed a group of people who were drunk.

Then, at the entrance to the bridge, I passed three teenagers
who, feeling uninhibited within the crowd, were taking illicit
drugs. Later on, under the arches along Encarnación
Square, even as the Brotherhood of the Gypsies passed in
procession, bars were teeming with people singing profane
songs, couples embracing and a drunkard sitting on the
ground throwing up.

As I felt pain in my feet and feeling tired after so many
hours walking and waiting, a doubt suddenly came to me:
Was the custom of holding processions worth it? Would it
not be better for all those people to be at home sleeping?

Was the price to be paid for some to do such pious exercises
not too high, as so many others only thought about
having fun, and did not know how to have fun without sinning?
And what was I doing in that street just before five in
the morning?

At that point, slowly turning the corner, The Christ of the
Gypsies appeared. There was complete silence. Everyone
looked at Him. The drunkard stood up unsteadily. Drums
and clarions exploded into a funeral march that made the
air vibrate. With the peculiar gait, the procession slowly advanced
toward the multitude.

Today once again, God made Man passed amid all of us
poor sinners thronging in the street, suffering His Passion
to save us. He was already moving away when a thunderous
applause erupted.

Posted by Robert Ritchie at 4:06 PM