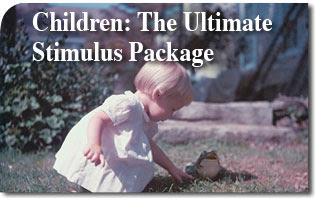 According to the reasoning, if it can be called that, of the likes of Margaret Sanger and company, we would all be better off if we reduced the world’s population. “The most merciful thing that the large family does to one of its infant members is to kill it,” the famous feminist once said.[1]

Steven Mosher, head of the Virginia-based Population Research Institute [PRI], happens to see things from a different perspective. That is, we need larger families to address the current financial crisis among other benefits. Higher birth rates and a revised tax code favoring children would do a lot to stimulate depressed economies.

Mosher clearly admits that low fertility rates are not solely responsible for our current economic woes, however they do play a significant role. Every child is born with a mind capable of being educated and myriad talents that can be developed. This combination of qualities can easily be put to use to solve problems and boost productivity. Creating an entitlement mentality generation does not.

The Social Trends Institute published an article titled “The Sustainable Demographic Dividend,” exposing the myth that low fertility rates equal sustainable economic prosperity. [2] It is true that a nation can realize this benefit in the short term, however it is the long term ill effects that we are now realizing in many countries.

An example of this demographic liability is the economic “miracle” of East Asia where the fertility rate plummeted from six children per woman and is now below two. Of course, such a low fertility rate allows for more human and financial capital to be devoted to the market economy rather than to child rearing, thus permitting a country to enjoy higher levels of economic growth in the short term. However, it is now apparent that what once was a demographic asset is rapidly becoming a liability. In over seventy-five countries where the fertility rate is substantially below the replacement level of 2.1 children per woman, there will be an insufficient young work force available that is needed to sustain the aging population and maintain economic stability.

Traditional marriage influences economies more than one might think. Recent studies clearly indicate that children raised outside of a family comprised of mother and father are significantly less likely to acquire the human and social capital needed to become productive and well-adjusted in the work-force. Those reared in traditionally married families enjoy a greater likelihood of success in grade school, graduate from college and generally are well compensated in employment as adults.

If corporations want to increase sales, they should target a healthy demographic that has proven to be a tried and true workhorse. Investing in a fertile future makes more sense than a sterile one. The rainbow crowd will not do anything to perpetuate the healthy profits companies now enjoy in the long term if fertility rates continue to decline and the traditional nuclear family is destroyed.