“God does not die…” This President was murdered after he returned to the practice of the Faith, and the fervor of his youth

Paris was, in fact, to Garcia Moreno a great school for the highest sciences; but, by the grace of God, Who was about to employ this man as an instrument of salvation to His people, it became also the focus of his true Christian life. For several years his early piety had been chilled. The tremendous political struggles in which he had been engaged had absorbed him so completely as to dry up his supernatural life. 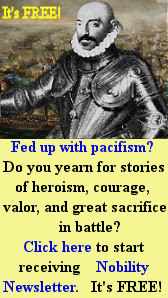 A singular incident brought back this noble soul to its previous fervor. He had been walking one day with some fellow exiles in the Luxembourg Gardens when the conversation turned on a man who had died refusing the Last Sacraments. Some of the party admired this act, saying the man had chosen his own line, and had kept it to the last. Garcia Moreno, on the contrary, argued that if a man had unhappily been irreligious in life, from the stress of business or other causes, it was monstrous to die in that impious condition.

His adversaries then began attacking the doctrines of the Catholic Church; but they soon found that they had to do with one stronger than themselves. With merciless logic and ardent faith, Garcia Moreno refuted all their arguments, and spoke of the Church with such ability and enthusiasm that his atheist companion, to cut short the discussion, exclaimed, “You talk well enough, my good friend; but if your religion be as beautiful as you describe it, it seems to me you are somewhat lax in its practice. Since when have you been to confession?”

“Then, my children, let us kneel down and say the Rosary together.” Garcia Moreno

This observation struck home, and Garcia Moreno bowed his head for a moment. Then, looking his friend full in the face, he said, “You have answered me by a personal argument which may be just today. But I give you my word of honor that tomorrow it will be worth nothing”; and so saying, he abruptly left them. In the solitude of his own room he reflected for some time on the years which had passed since the day, when, full of fervor, he had consecrated himself to the service of God at the feet of the Bishop of Guayaquil…. Stung with remorse, he threw himself on his knees, prayed fervently for some time, and then, that very evening, went to confession to the first priest he found in the church. The next day he received Holy Communion, thanking God, Who had forced him to blush for his coldness and negligence.

From that moment he went back to all his old habits of piety, and never again gave them up.

Short Stories on Honor, Chivalry, and the World of Nobility—no. 334

August 6 – He told his assassins “God does not die!”