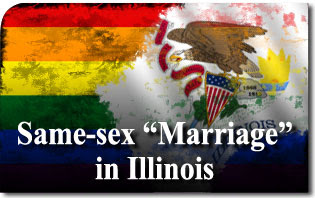 “After months of false starts, the Illinois House of Representatives on Tuesday voted to legalize same-sex marriage, and reports suggest that Pope Francis's recent comments about homosexuality may have played a small but significant role.”[1]

This is how Fabien Tepper begins her report in The Christian Science Monitor of November 6, 2013 on the approval of same-sex “marriage” in Illinois. In it she highlights how Pope Francis’s words on homosexuality influenced that approval.[2]

Along the same line, Monique Garcia and Ray Long write in the Chicago Tribune that same-sex “marriage” advocates “received additional help from Pope Francis, who warned that the Catholic Church could lose its way by focusing too much on social stances, including opposition to homosexuality. ‘If a person is gay and seeks God and has good will, who am I to judge him?’ Francis said in July.”

According to these journalists, “[t]he comments sparked a wave of soul-searching by several Catholic lawmakers who had battled to reconcile their religious beliefs with their sworn duty to represent their constituents who were increasingly supportive of gay rights even as Cardinal Francis George remained opposed.”

They cite the case of Rep. Linda Chapa LaVia (D), an undecided legislator who ended up voting in favor of same-sex “marriage.” She stated: “As a Catholic follower of Jesus and the pope, Pope Francis, I am clear that our Catholic religious doctrine has at its core love, compassion and justice for all people."[3]

Journalist Dave McKinney commented in the Chigago Sun-Times that “despite harsh rhetoric on the issue from Cardinal George and other Catholic leaders, their positions against the bill were severely undercut by several statements from newly installed Pope Francis that were widely interpreted—as Madigan himself did Tuesday—as more welcoming to gay and lesbian couples.
[4]

Indeed, House Speaker Michael J. Madigan (D), a Catholic who was accused of failing to fully back that legislation, not only changed this position but claimed he convinced about a dozen legislators to support the bill. While saying that his stance preceded Pope Francis’ statements, he made sure to quote the latter on the floor of the House.

“House Speaker Michael J. Madigan was one of the final speakers in the debate, giving the bill his blessing, pledging to vote yes and quoting Pope Francis. ‘My thoughts regarding this legislation were formulated before the quote I’m going to offer to all of us,’ Madigan told colleagues, as the packed House chamber fell silent.

“And the quote that I offer is a quote from Pope Francis of the Roman Catholic church, who is quoted as saying, ‘If someone is gay, and he searches for the Lord, and he has good will, who am I to judge?’

“Pope Francis has spoken, and he has articulated the basis of my thinking on this issue,” said Madigan, who later acknowledged having personally lobbied between five and 10 House Democrats to support Harris’ bill."[5]
According to a news account in the Chicago Tribune,the speaker went on to say:

"For those that just happen to be gay—living in a very harmonious, productive relationship but illegal—who am I to judge that they should be illegal?"[6]

The Culture War and Semantic Precision

The Illinois House narrowly approved the legislation by 61 votes to 54, with two Representatives voting present. As mentioned, Rep. Linda Chapa LaVia (D), a one-time undecided Catholic representative, justified her vote in favor of approval, based on the fact that she is Catholic and a follower of Pope Francis to justify her vote for the law.

Likewise, on the floor, the Speaker quoted the Pope’s words, “Who am I to judge?” Maybe he used these same words to convince the five or ten representatives he claims to have swayed. Were it not for their change of position the measure would have been defeated, with as many as 64 nays to 54 ayes. At any rate, it is well to note that the law obtained only one vote above the 60 needed for approval.

Analyzing these media accounts, it appears obvious that the use of the Pope’s various statements on homosexuality (“Who am I to judge?”; “We cannot insist only on issues related to abortion, gay marriage and the use of contraceptive methods”), significantly influenced the approval of same-sex “marriage” in Illinois, by strengthening those in favor and swaying some who formerly opposed it to change their vote.

In order to better understand this shift, imagine if the Holy Father, instead of issuing the statements used by same-sex “marriage” advocates, had insisted on the need to preserve natural marriage between one man and one woman and called on Catholics and all men of good will to take a clear and resolute stand against the international campaign to subvert the natural moral law. Would that not have weighed in the scales, tilting them in favor of the opponents of same-sex “marriage” in Illinois?

In war—and the “Culture War” is a real war, though an unbloody one—any tactical mistake or the opening of one’s flank is exploited by the enemy.

The Pope’s words, both on the plane returning from Rio de Janeiro to Rome and in his interviews with Civiltà Cattolicaand the Italian daily La Reppublica were jubilantly received by the homosexual and pro-abortion movement.

The Human Rights Campaign, the leading organization of the homosexual movement in the U.S., and pro-abortionist NARAL publicly thanked the Supreme Pontiff.[7]

Men’s Laws Will Never Change the Law of God

The approval of legislation opposed to the principles of the natural and Divine Laws in one more American state will negatively influence many people. But those who hold fast to the faith of our fathers will say with Saint Peter and the Apostles: “We ought to obey God, rather than men”(Acts 5:29). This Illinois law changes neither human nature nor Divine Revelation. Holy Writ is clear on the sinfulness of homosexual acts. Saint Peter, to whom Our Lord entrusted His Church, teaches:

“And [God], reducing the cities of the Sodomites, and of the Gomorrhites, into ashes, condemned them to be overthrown, making them an example to those that should after act wickedly” (2 Pet. 2:6.)

Posted by Robert Ritchie at 6:30 PM