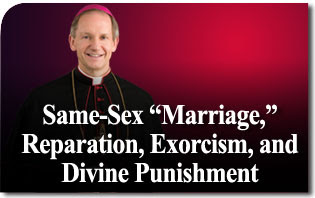 “Whoever sins belongs to the devil” the Apostle St. John warns us.[1] This is because by breaking his friendship with God through serious sin, the sinner is placed at the mercy of diabolical influence for as long as he is in that sinful state.

An Appropriate Ceremony by the Bishop of Springfield

This means that the ceremony titled Prayers of Supplication and Exorcism in Reparation for the Sin of Same-Sex Marriage, performed by Most Rev. Thomas John Paprocki,bishop of Springfield (Illinois) at the Cathedral of the Immaculate Conception, on November 20, 2013 was fully appropriate.[2]

In his homily, Bishop Paprocki explained the ceremony’s reason: “Our prayers at this time are prompted by the fact that the Governor of Illinois today is signing into Illinois law the redefinition of civil marriage, introducing not only an unprecedented novelty into our state law, but also institutionalizing an objectively sinful reality.”

Running counter to the dominant political correctness, he added: “It is not hateful to say that an immoral action is sinful. On the contrary, the most compassionate thing we can do is help people to turn away from sin. To ignore another person's wrongful actions is a sign of apathy or indifference.”And further on: “God's mercy and forgiveness extend to those who repent.

Mercy does not mean approving of something that is sinful, but does absolve the wrongdoer after a change of heart takes place in the sinner through the gift of God's grace.”

The Bishop of Springfield then went on to recall basic principles of Catholic morals, including the grave responsibility of the legislators who approved the iniquitous law, and of the governor who signed it: “Politicians responsible for enacting civil same-sex marriage legislation are morally complicit as co-operators in facilitating this grave sin.”

He explained the reason for carrying out the exorcism: “I’m not saying that anyone involved in the redefinition of marriage is possessed by the devil, which, if that were the case, would require the remedy of a ‘Major Exorcism,’ but all of us are certainly subject to the devil's evil influences and in need of protection and deliverance from evil. Our prayer service today and my words are not meant to demonize anyone, but are intended to call attention to the diabolical influences of the devil that have penetrated our culture, both in the state and in the Church.”

He went on to emphasize how the devil intervenes in the same-sex “marriage” issue through “deception, division, diversion and discouragement.” ─ “The work of discouragement by the Devil in same-sex marriage is apparent in the message being conveyed to defenders of traditional marriage that the universal redefinition of marriage is unstoppable, so we might as well just stop trying.”

No, the bishop continued, the struggle will continue. He recalled that “the legalization of abortion on demand forty years ago did not silence those who believe that abortion is contrary to God's law.” On the contrary, it showed the need for a more vigorous reaction on the part of those who seek to defend life. “So, too, the legal redefinition of civil marriage does not put an end to the need for discourse and action to defend natural marriage in accord with God's plan, but only serves to heighten the need for greater efforts in this regard.”

By fearlessly presenting the traditional doctrine of the Church on sin, and specifically the sin of sodomy and of same-sex “marriage,” Most Rev. Thomas John Paprocki’s attitude and words strengthen and encourage the faithful to continue the struggle against the imposition of an unnatural order of things. It is therefore with gratitude that we mention it.

Are Tornados a Punishment from God?

The law allowing same-sex “marriage” ─ and institutionalizing “an objectively sinful reality,” as Bishop Papockri adroitly defined it ─ was approved on November 5. Less than two weeks later, on the 17th, a series of devastating tornadoes struck the Midwest, including Illinois, causing deaths and wreaking great destruction.

“The massive tornadoes that hit Illinois after the passing of the same sex “marriage” bill,  has stimulated many people to reflection.

“In it, some see God’s chastisement; others see it as yet one more merciful warning from Providence; others yet deny both options and give various reasons.

“What do you think?”

And he concluded by referring the readers to an extensive article on God’s punishments.[3]

Is It Absurd to Think That God Punishes?

Several liberal publications, some linked with the homosexual movement turned that question into an affirmation, reporting about it ironically as if it were an absurdity.[4]
Yet there is nothing absurd or offensive about the question. It is based on principles of Catholic Theology and Philosophy.

Since God is the creator and maintainer of all things, including the laws that govern natural events, no catastrophy occurs without His knowledge and permission. Indeed, to suggest that the forces of nature act wholly on their own to the exclusion of any Divine plan is to deny that they are God’s creatures. It is to affirm either that the Creator made things without an end and purpose, or that He is unable to intervene in His own creation.[5]

The Sacred Scriptures attest that the Creator can and does employ natural means to punish a people, for example, the ten plagues of Egypt at the time of Moses[6]

Final punishment for individual sins only takes place after death, when a person’s eternal destiny is decided—in the case of an impenitent sinner, hell with its torments.  But a sinner can also be punished for his faults on earth.

As for nations, states or regions, since they do not pass into eternity, they are always punished on this earth.

One objection might be that disasters strike both the righteous and sinners. Therefore, they cannot be punishment. This objection is unfounded: for the righteous, sufferings are an occasion to show patience and faith, and thus to progress in virtue. For sinners, God's chastisements on this earth, besides vindicating the offended divine justice, have a remedial nature. That is, they come with graces for the sinner to repent and convert.

For God does not want the sinner to die but to convert and live, as He says through the mouth of Prophet Ezekiel: “I take no pleasure in the death of the wicked, but rather that they turn from their ways and live."[7]

Divine Providence, which is God’s Wisdom governing events, does not always punish a person or a people immediately for their faults. God’s designs are unfathomable and He can both punish immediately, out of mercy for the sinner—to encourage him to repent—or, as a punishment, He may allow the sinner to live tranquilly in sin.

Let Us Hear the Voice of God in Disasters

In order to take advantage of divine punishments we need to know how to discern them in catastrophes, but also to relate them with present sins, and especially those that most offend God because they are against human nature itself, which He made ​to His image and likeness.

Posted by Robert Ritchie at 3:06 PM