"Dear Jesus, Please Forgive my Sins, so I Can Go to Heaven"

Warriors Only Ask America to “Drape a Flag over Their Coffin” 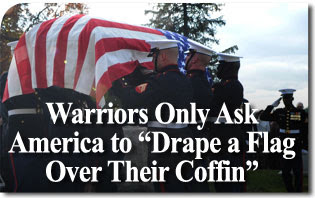 The Annual Veterans Conference put on by the American Veterans Center is always a special event, dedicated to preserving and promoting the legacy of our brave servicemen. They did not fail once again to put on a splendid event this November 9-11.


"Dear Jesus, Please Forgive my Sins, so I Can Go to Heaven"
The first evening’s event featured a panel of Wounded Warriors. During the reception beforehand, I was surprised when one of those warriors, Corporal Garrett Jones from Newberg, Ore., happened to sit across from me for cocktails and hors d’oeuvres. It turned out to be one of the most memorable conversations of the event.

What struck me most about this 28-year-old Marine was the utter absence of self-pity in spite of the fact that he was an amputee. He told the gripping details of how he lost his leg while serving in Iraq back in July of 2007. When a 155mm Improvised Explosive Device (IED) was detonated under his feet, he was thrown into the air like a rag doll. He never lost consciousness and attributed his survival to the "grace of God."  He thought he was dying because of the difficulty he had breathing. He then started feeling very cold from loss of blood and felt his death was certain.

“Dear Jesus,” he recalled praying, “please forgive my sins, so I can go to heaven.” He would go on to survive and surprisingly tells how he never suffered a day with Post Traumatic Stress Disorder (PTSD). He humorously defined himself as a “black-and-white kind of guy. There are three types of people in the world,” he said, “sheep, wolves and sheep dogs.” It was clear that he placed himself squarely among the latter. Another word for sheep dogs, he explained, is “warrior.” 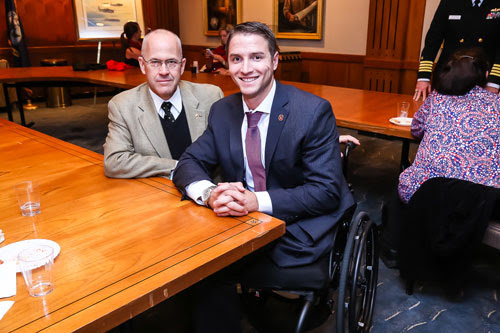 "Dear Jesus, please forgive my sins, so I can go to heaven," prayed a dying Garret Jones, right, after an IED had detonated under his feet. Although an amputee, he resisted self-pity and even deployed with his unit when they deployed the following spring. (Courtesy of Tony Powell)

“Such men need to be willing to do violence on behalf of the sheep,” he continued. “That means they need to be ready to fight, be wounded, and if necessary, die… and be fine with it.”
This no-nonsense Marine described his reaction when he heard his unit would be deployed to Afghanistan after his injury. “I am going with you,” he informed his commander in a very decisive way. With the help of higher ups including the then-Marine Corps Commandant, Gen. Conway, he did in fact deploy the following spring.

Medal of Honor Panel
During the following day’s Veterans Conference, attendees were treated to a wide variety of heroes and legends. Medal of Honor recipients Gen. Patrick H. Brady and Staff Sgt. Clinton Romesha were part of one panel. They took questions from the audience while the Congressional Medal of Honor Foundation President and top gun pilot, Maj. Gen. Thomas Wilkerson moderated. Like most recipients of the Medal of Honor, both men showed great humility in wearing our nation’s highest honor for valor.

“I did what any other soldier would have done,” said Staff Sgt.Romesha as he choked back tears in remembrance of those who did not survive. Gen. Brady drew a laugh from the audience by describing how he was “embarrassed” to receive the award. He went on to describe how the medal represents “all those who didn’t make it back. They don’t come from easy days,” but rather from a difficult moment “when you’re faced with an adversity.”

The Honor Banquet
The highlight of the conference however was the Honors Award Banquet. Doris Day, the charming and gracious widow of Col. Bud Day was there to accept The Doolittle Tokyo Raider Wings of Valor Award that was posthumously awarded to her late husband. With her always sparkling blue eyes, this wonderful lady expressed her gratitude and explained how Jimmy Doolittle was her husband’s hero.

The last living member of the legendary Navajo Code Talkers, Chester Nez was also on hand. During World War II, the Japanese broke every code devised by Americans except the one devised by a Navajo Indian named Philip Johnston. His undecipherable code was based on their language and was so effective that the 29 original code talkers could communicate in 20 seconds what it previously took coding machines half an hour.

Mr. Nez was only a tenth grader when Marine recruiters came to his boarding school looking for young men who were fluent in both English and the Navajo language. He jumped at the chance to serve his country, lied about his age, and signed on with the Marines. He was the first of the original Code Talkers, which took part in every Marine assault in the Pacific. They sent thousands of messages that baffled Japanese military cryptologists who were unable to decipher a single one.

The Devil of Ramadi
The most special part of the evening however was the moment when the late Chris Kyle was posthumously awarded the Paul Ray Smith Award. It was difficult to restrain one’s emotions as a moving video tribute of this All American Hero was projected on screens at both ends of the room. 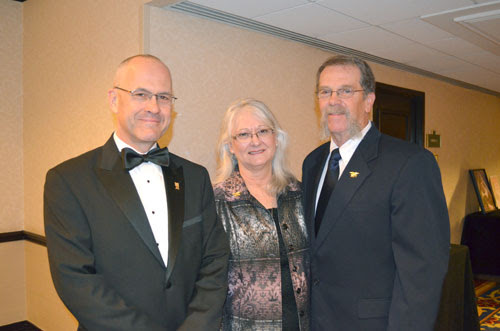 With the parents of the late Navy S.E.A.L., Chris Kyle, who had racked up 160 confirmed kills, earning him the nickname, The Devil of Ramadi. (Courtesy of Carrie Hanna)

His parents, Wayne and Deby were there to receive the award on behalf of their fallen son. As a Navy SEAL sniper, Chris Kyle racked up an astounding 160 confirmed kills during his time in combat, a US military record that is unlikely to be broken. He was so deadly he earned the nickname, The Devil of Ramadi by the enemy who placed an $80,000 bounty on his head.
His life was brought to an abrupt end when he was shot and killed by a Marine suffering from PTSD that he was trying to help. As his grieving parents walked on stage to receive the award, the audience erupted with a standing ovation that seemed to go on forever. I personally could have clapped until my hands were bleeding for that man.

Doolittle Raider Toast
As the evening winded down, conference organizers explained the significance of the bottle of Hennessey Cognac sitting at the center of each table. As we were celebrating heroes in our nation’s capital, another crowd at the Air Force Museum in Dayton, Ohio was honoring three of the last four remaining Doolittle Raiders. This heroic group of pilots conducted the retaliatory raid on Tokyo, Japan after the infamous attack on Pearl Harbor. Their historic feat had the double result of lifting American moral and demoralizing an intransigent enemy that thought they were invincible.

In 1959, the city of Tuscon, Arizona presented the group with 80 sterling goblets etched with the names of all the original Raiders and a bottle of 1896 Hennessey Cognac in honor of the birth year of their founder Jimmy Doolittle. At each yearly reunion since then a tradition was born. The remaining living members would toast those who had passed away on the previous year, then turn the goblet of the deceased upside down. The original plan was to save the 1896 bottle of Hennessey for the last remaining Raider. With the death of Thomas Griffin earlier this year and the failing health of another, it was decided to bring this extraordinary tradition to a ceremonious end.

As the remaining Doolittle Raiders were making their last toast, attendees of the Veterans Conference were with them in spirit. It was a chilling moment as the shining amber liquid was poured into each of our goblets. This spine-chilling event gave me time to reflect on the previous days' events.

We are truly the land of the free because of such daring men like those Raiders and other selfless “sheep dogs” like Chris Kyle and Corporal Garret Jones. Men such as these ask nothing in return for laying their lives on the line for us. This became clear for me as I remembered a comment made by Corporal Jones during our conversation on the first evening. When he was blown into the air by an IED and felt sure he was dying, he admitted “being okay with it. Warriors always are,” he said, “as long as [America] drapes a flag over their coffin.”