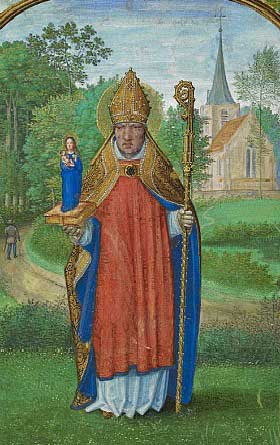 Boniface was born in Belgium in 1205, and when he was just 17, was sent to study at a university in Paris. Once he completed his education, he remained at the university as a teacher, and over the course of seven years, became a very popular lecturer.

When the students at the university became locked in a dispute with their teachers and started boycotting classes, Boniface left Paris to fill a post at the cathedral school in Cologne.

Just two years later, in 1230, Boniface was elected Bishop of Lausanne. He accepted his new position enthusiastically and devoted all his energies to the spiritual leadership of his diocese.

But his eight years as Bishop of Lausanne were riddled with disputes, and the people of his diocese were discontented with his frank and open ways in the pulpit: he publicly scolded Emperor Frederick II and the local clergy for their corruption.

As a result of this rebuke, in 1239 he was attacked and gravely wounded by Frederick's men. This caused Boniface to ask Pope Gregory IX for permission to resign as bishop. The pope agreed, and Boniface returned to his native Belgium and began living at the Cistercian monastery at La Cambre. Although he stayed there for the rest of his life and wore the habit of the order, he apparently never became a Cistercian.

Boniface was canonized in 1702.
Posted by America Needs Fatima at 1:21 PM