Jerome was born in Venice in 1481. As a military commander who prided himself on the strength of his army, he was not a man of God. Yet when he was taken prisoner and thrown in a dungeon, the proud leader turned to God and miraculously escaped his captors. After his conversion, Jerome dedicated himself to Our Lady and the work of God, and was eventually ordained to the priesthood in 1518. 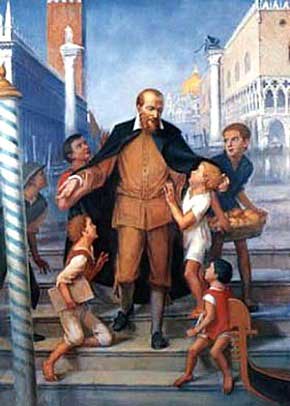 At that time, famine and plague were rampant in Northern Italy, and Jerome devoted himself to caring for sick orphans, housing and teaching them Catholicism. After contracting the plague and recovering, Jerome decided to wholly devote himself to caring for others. In 1531, he established multiple orphanages and a shelter for penitent prostitutes, and just a year later, along with two other priests, a congregation for men. The congregation, named The Clerks Regular of Somascha, mainly saw to the care of orphans and the instruction of youths and young clerics.

In 1537, Jerome caught an infectious disease while caring for the sick, and died on February 8. The Clerks Regular of Somascha still exist today, and it is said Jerome Emiliani was the first to introduce the idea of teaching catechism to children.
Posted by America Needs Fatima at 6:20 PM