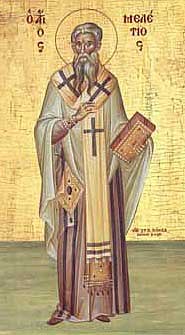 Meletius was born a Melitene, and belonged to one of the most distinguished families of Lesser Armenia. He was a kind and gentle man, and a great lover of peace. His virtue gained him the confidence and esteem of both the Catholics and Arians, and he was made Bishop of Antioch. However, the patriarchal Church of Antioch had been oppressed by the Arians, who denied the divinity of Christ, since 331, and some among the Catholics refused to acknowledge the new bishop, distrusting him because he had the support of the Arians.

The Arians hoped that the new bishop would declare himself a supporter of their heretical beliefs, but were undeceived when the Emperor Constantius ordered Meletius, along with two other men of faith, to explain the wisdom of God.

The first prelate explained it in an Arian sense, and the next explanation boarded on heresy, but Meletius proclaimed the truth, supported by Catholicism, and explained the Eternal Wisdom while linking it to the Incarnation of the Word. This public statement angered the Arians, and they banished the holy man and stripped him of his position.

Meletius was banished to Lesser Armenia and the Arians introduced Euzoius into the position. Euzoius was a former deacon of Alexandria, who with the priest and arch-heretic Arius had been previously exiled by St. Alexander, Bishop of Alexandria.

Meletius was eventually reinstated as bishop after the Arian persecution ended in 378, and he died while presiding over an ecumenical council in the year 381.
Posted by America Needs Fatima at 2:24 PM