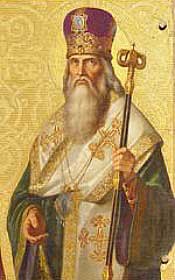 Tarasius was born around the middle of the eighth century. Raised in a patrician family, Tarasius was surrounded by earthly wealth and possessions, but lived a most austere and holy life. His virtue gained the esteem of the empire, and Tarasius was made Patriarch of Constantinople.

The emperor of the time, Constantine VI, became enamored of Theodotah, a maid of his wife, and sought to divorce his wife and marry her maid. As he strove to convince Tarasius to marry him to Theodota, the emperor sent a message to the holy man. Tarasius adamantly refused, replying to the emperor's ambassador, “I would rather suffer death and all manner of torments than consent to his design." He continued to reject the emperor’s requests, and the ceremony was performed by another.

Just before his death, Tarasius fell into a trance. As his biographer, who was an eyewitness, relates, he was heard arguing with a number of unseen accusers. Tarasius defended himself against the accusers, and answered everything laid to his charge. Later, a great peacefulness came over him, and Tarasius gave up his soul to God in 806.
Posted by America Needs Fatima at 8:37 PM