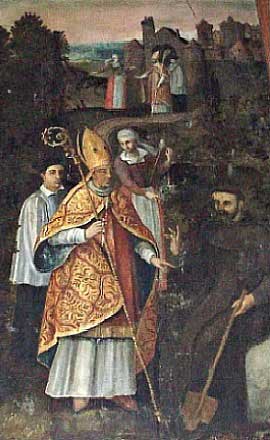 Romanus was just 35 years old when he dedicated his life to that of a hermit, living humbly in prayer in the Jura Mountains between Switzerland and France. At first, Romanus lived under the protection of a large tree, and survived on the seed he had brought with him. Before long, however, he was joined by his brother, sister and a number of other followers. The brothers’ built two monasteries and a nunnery for their sister and each sibling governed their respective establishments.

Romanus decided to visit the place of martyrdom of the Theban Legion, a band of 6600 Catholic soldiers who were killed in 286 A.D. when they refused to assist in the eradication of Christianity. As he traveled, the holy monk came upon two lepers, and miraculously cured them. News of this miracle spread, and Romanus became well-known as a man of God.

Romanus died around 460 and was buried in the church of the nunnery where his sister governed.
Photo by: Giogo
Posted by America Needs Fatima at 11:06 AM