By 1549, St. Francis Xavier had begun the evangelization of Japan. After he left to spread the faith elsewhere, a Catholic community flourished. The community grew, and eventually expanded to include Paul Miki, a high-born Jesuit priest who became well-known as a preacher. Paul followed St. Francis’ footsteps and continued the spread of Christianity, along with missionaries and priests from various countries and orders. 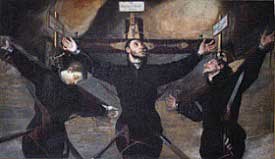 In 1597, Hideyoshi, a powerful Japanese official, listened to the gossip and lies of a Spanish merchant. The merchant said that Paul and the missionaries were traitors of Japan, and were spies for Spain and Portugal. Hideyoshi cut off the left ears of twenty-six Catholics, including Paul Miki, smeared their cheeks with blood as a warning to others and paraded them through towns before executing them. Priests, brothers, laymen, catechists, doctors, servants, old men and innocent children were bound to crosses and raised into the air, a lance trust into their sides, killing them. Hideyoshi crucified the martyrs on a hill, now known as the Holy Mountain, above Nagasaki. They were canonized in 1862. 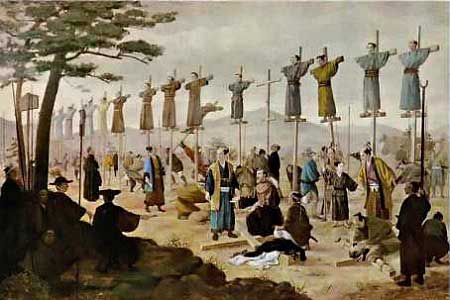 Posted by America Needs Fatima at 10:24 AM