The Cross is an even greater gift than faith

While waiting for that great day of the last judgment, Eternal Wisdom has decreed the Cross to be the sign, the emblem and the weapon of his faithful people. He welcomes no child that does not bear its sign. 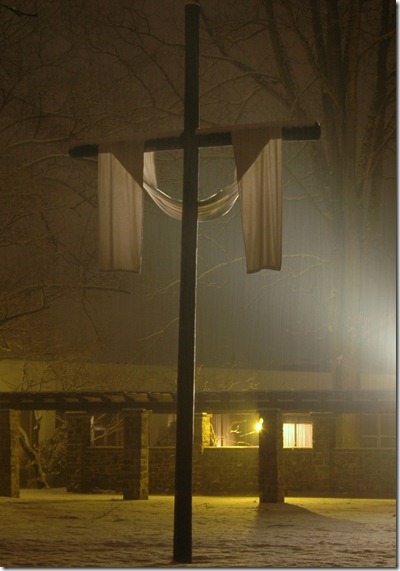 He recognizes no disciple who is ashamed to display it, or who has not the courage to accept it, or who either drags it reluctantly or rejects it outright.

He proclaims, "If anyone wishes to come after me, let him renounce himself and take up his cross and follow me." (Mt 16.24; Lk 9.23) He enlists no soldier who does not take up the cross as the weapon to defend himself against all his enemies, to attack, to overthrow and to crush them. And he exclaims, "In this sign you will conquer.

Have confidence, soldiers of mine, I am your leader; I have conquered my enemies by the cross (Jn 16.33), and by it you also will be victorious."

He has enclosed in the cross such an abundance of grace, life and happiness that only those who enjoy his special favor know about them. He often reveals to his friends his other secrets, as he did to his Apostles: "All things I have made known to you," (Jn 15.15) but he reveals the secrets of the Cross only to those who make themselves worthy by their great fidelity and great labors.

One must be humble, little, self-disciplined, spiritual and despised by the world to learn the mystery of the Cross. The Cross even today is a source of scandal and an object of folly not only to Jews and pagans, Moslems and heretics, the worldly-wise and bad Catholics, but even to seemingly devout and very devout people.

Yes, the Cross remains an object of scandal, folly, contempt and fear: not in theory, for never has so much been spoken or written about its beauty and its excellence than in these times; but in practice, because people lose courage, complain, excuse themselves, and run away as soon as a possibility of suffering arises.

"Father," said this incarnate Wisdom, when beholding in joyful rapture the beauty of the Cross, "I thank you for having hidden these things – the treasures and graces of my cross - from the wise and prudent of this world and revealed them to the little ones." (Lk 10.21)

If the knowledge of the mystery of the Cross is such a special grace, how great must be the enjoyment when one actually possesses it?

This is a favor Eternal Wisdom bestows only on his best friends and only after they have prayed for it, longed for it, pleaded for it. However excellent is the gift of faith by which we please God, draw near to him and overcome our enemies, and without which we would be lost, the Cross is an even greater gift. "It was a greater happiness for St. Peter," says St. John Chrysostom, "to be imprisoned for Jesus Christ than to be a witness of his glory on Mount Tabor; he was more glorious bound in chains than holding the keys of paradise in his hand." (Acts 12.3-7; Mt 16.19)

St. Paul esteemed it a greater glory to wear a prisoner's chains for his Savior than to be raised to the third heaven (Eph 3.1; 4.1; 2 Cor 12.2). God bestowed a greater favor on the Apostles and martyrs in giving them his Cross to carry in their humiliations, privations and cruel tortures than in conferring on them the gift of miracles or the grace to convert the world. All those to whom Eternal Wisdom gave himself have desired the Cross, sought after it, welcomed it.

Whatever sufferings came their way, they exclaimed from the depths of their heart with St. Andrew, "O wonderful Cross, so long have I yearned for you!"